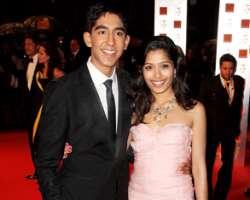 TOYIN Subair, the founder and Chief Executive Officer of HiTV, the Nigerian-owned cable television network, sat across the table at the Sheraton. He couldn't contain his excitement about Slumdog Millionaire. "That is what our actors and actresses in Nollywood should be aiming for", he exclaimed. "A single rags to riches story by Indian actors. It was the star film at this year's Oscars. If the Indians can do it, Nigerians can do it too. If we want to rebrand Nigeria, that is what we should be doing. Slumdog Millionaire is a great branding opportunity for India." He is absolutely right. But a Nigerian film winning the Oscars will require a lot more than wishful thinking.

Everyone is talking about Slumdog Millionaire. It won at this year's Oscars, on Sunday, February 22, eight Academy Awards: Best Picture, Best Director, Best Adapted Screenplay, Best Sound Mixing, Best Film Editing, Best Original Scene, Best Original Song, and Best Cinematography. Directed by 52-year old British film director, Danny Boyle, with Indian actors and French financial co-support, Slumdog Millionaire is a low-budget, bilingual, (Hindi/English), movie. The screenplay by Simon Beaufoy is based on the novel by Vikas Swarup, titled Q and A. The Western press has been quick to classify the film as British, the director is British, and it was originally sponsored by British companies - Celador Films and Film4 Production but there is no doubt that essentially, Slumdog Millionaire is a major triumph for the Indian movie industry, otherwise known as Bollywood and for Indian literature and art. When the Oscar-winning Slumdog ensemble returned to India after the Oscars, the Mumbai Airport was besieged by thousands of Indian patriots who came to share with the actors and actresses, including six children, who are now national heroes, the glory that they had brought to their nation.

Slumdog tells a simple, human story of how a street kid rose from the slums to become a millionaire, having won the top prize in an Indian version of Who Wants to be a Millionaire? With a series of flashbacks and amidst dance and extreme naturalism, the film conveys pictures of passion, and love, relying heavily on the modes and tenor of Indian commercial cinema. It is easily one of the most successful films of all time. Indian cinematography is popular internationally, and it is particularly so among Nigerians, but Slumdog Millionaire again reinforces the view that a well-told story will find its own audiences whether it is acted by Eskimos, Indians, or Nigerians.

In an age of globalization, cultural products are expanding the boundaries and limits of expression, providing a communitarian sense of values in ways hitherto unimagined. The triumph of Slumdog Millionaire at this year's Oscars is proof of how increasingly globalised the Oscars have become. Is there a possibility that some day Nigerian actors and actresses, working at home, will gain quality international recognition and win the Oscar? It is not impossible. Nigeria boasts of abundant talents in culture and other fields. Nigerians have won the Nobel Prize, the Grammy Award, the Pulitzer, the Olympics Gold Medal...an Oscar Prize is not beyond us.

It has taken Indian cinema 90 years before it could seize Hollywood by storm, and inflict Indian faces as box office heroes, across North America and Europe. It needs not take Nollywood that long. At the moment, Nigerian movies represent perhaps the country's best branding opportunity across Africa. Thanks to cable satellite television, Multichoice/DSTV, Nigerian movies are shown everyday on the African Magic channel. From North Africa to Cape Town, our actors and actresses have become famous. Nigerian traditional culture and customs have become continent-wide symbols. It is not unusual these days, to find other Africans calling a Nigerian "Igwe!", a phrase that is taken straight from Nigerian movies. The Nigerian home video industry provides employment for many and it has effectively advertised the Nigerian potential in this line of business. Nollywood is the largest producer of movies after Bollywood and Hollywood. But to take advantage of globalization, and to attract outside attention and investment as Bollywood does, the Nigerian movie industry must address challenges of capacity, organization and quality.

Slumdog Millionaire is a small budget film, which shows that producing a good film is not necessarily a function of cash, but art and imagination. Funding is a major challenge in Nollywood, but it has been turned into an obstacle and a threat due to the failure of standards. The same movies that have brought so much attention to Nigeria are not often the product of art and creativity, but of expediency and obstructive politics. The business is dominated by so-called marketers who provide the funds for the production of the films and who also insist on usurping the functions of the movie director, the casting director and the artistic director. Marketers whose only relevance is the cash that they provide and the retail outlets that they run, dictating the artistic content of Nollywood are partly responsible for the observed ills in the industry: the deluge of sub-standard story lines, unimaginative cloning of story lines with so many of the movies looking and sounding alike, the lack of imagination in casting, and a complete, or near-complete absence of ambition.

With the global economic crisis and dwindling resources, the proliferation of second-rate movies in Nollywood may worsen. Leaving the industry almost entirely in the hands of speculators exposes government's inability to see the importance of Nollywood. Through such instruments as the Cultural Policy of Nigeria (1988), National Film Policy (1992), the Mass Communication Policy (1990), the Nigerian Film Corporation Act (1979), the Nigerian Copyright Act (1988) and the National Film and Video Censors Board Act (1993), the Nigerian Government has tried to pay lip service to the importance of culture. But there is not yet a demonstration of the understanding of the nexus between culture and development, culture and foreign relations, and the strategic place of Nollywood in this interface. Both India's Bollywood and America's Hollywood may be seen by outsiders as "big business" but they have roots that run deep into the heart of respective national systems and politics.

The Nigerian government at all levels, must begin to take a more serious interest in the movie industry and by extension in culture and the arts, by providing facilities and an enabling environment to facilitate production, distribution and exhibition, and the integrity of cultural work. Slumdog Millionaire didn't just happen - it is a by-product of years of national investment in culture. It owes its inspiration in nearly every respect, to the Hindi cinema. And just how central and sensitive a cultural product could be, or function as a brand is evident in the extreme emotions that Slumdog Millionaire has generated in India. While its success has been embraced by many Indians, its content has also been criticized by Indian nationalists who protest that its advertisement of Indian slums is distasteful. Slum dwellers in India have carried placards saying "I am not a dog." The film was initially dismissed locally for romanticizing poverty and as a piece of post-colonial racist condescension. But with 6 Oscars, 4 Golden Globes, 7 BAFTA awards and 5 Critics' Choice awards, the film has become a cause celebre. The ruling Congress Party has even bought the exclusive rights to use the winning song in the film, "Jai Ho" ("Be Victorious") as campaign song. This cross-territorial impact of the film is a fitting demonstration of the power of art.

There is a crying need for professionalism in Nollywood. The industry, despite its popularity and impact is gradually being overtaken by home-grown mediocrity. Every actor and actress is a potential producer, movie director and screenplay writer. This "jack-of-all-trades" mentality reduces the quality of the output. When this is not the case, a typical Nigerian film is a family-affair. I have seen quite a number of these films in which the cast and crew are made up of husband, wife, brothers and children. Casting is not determined by ability but filial relations. The dialogue is poor.

There are a few good directors: Teco Benson, Amaka Igwe, Zeb Ejiro, Chidi Chikere, Tunde, Kelani, Tade Ogidan, Izu Chukwu ... Many of the actors and actresses are truly talented, but the absence of a filtering process encourages the influx into the industry of so many pretty faces without ability. Nollywood can benefit from internal organization. There is an Actors Guild of Nigeria, but it is heavily politicized, divided as it is into ethnic cartels and atomistic ego units. The indigenous language movie actors and actresses (in Yoruwood, and Kannywood) are just as guilty in this respect as their counter-parts in the English languages movies. A Motion Picture Council of Nigeria is long overdue, with a responsibility to raise standards and enforce professionalism.

Nollywood stakeholders must see the success of Slumdog Millionaire as a personal challenge. At the individual level, the actors, actresses, producers, directors, etc. must endeavour to raise the level of their performance by seeking fresh knowledge about art and film. There is much in Slumdog Millionaire that is about individual accomplishment and distinction. It is this that Nollywood must aim for if it hopes to remain relevant.