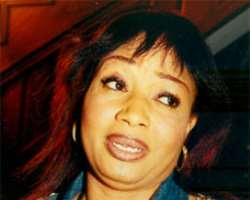 Pioneer Nollywood star actress/producer Princess Tina Amuziam's first romance with the klieg lights started with NTA in the late 80's, but stardom did not beckon until she joined Nollywood in '96. Amuziam eventually became a household name and further won the hearts of movie buffs with her dazzling role in the hit movie Glamour Girls. The Delta State born thespian, since then, has continued to wow Nollywood with her skills and panache.

Amuziam, who has also gone into moviemaking as a producer will be hitting shelves soon with Woman of Destiny, her latest flick. Speaking with us recently, after a long absence from the spotlight, Amuziam, bared her mind on several issues within and outside the industry, her latest production billed for Ghana among other germane issues..

Long time no see, what's new with you this 2009?
I have been around and doing great for God and Nollywood, I think its you that has not looked for me. This 2009, part of my plan is to be more committed to God's work and my NGO, which is an arm of my Open Heart Prayer Ministry. Also, very soon, I will be going to Ghana to shoot a big budget movie with stars from both countries. Above all, the time has come for the national and international release of my long awaited movie, Woman of Destiny. Also, I recently opened a one stop nail studio in the heart of Surulere, Lagos. These and many more will be keeping me busy this year and even beyond. Meanwhile, at the appropriate time, I will make public more of my plans and good intentions for the industry.

How about the rumour that you went underground for some undisclosed reasons?

No, never, I've been around, though I stepped aside for sometime in order to repackage and know more about my creator. Again, I've been busy working too, though silently.

Truth is that another reason I am back fully and investing in the industry is the fact that it has been sanitized to an extent, and then it was really something else.

Is that part of the reasons you eventually veered into movie production?

You know I've been around in the industry for a long time and just decided I should do it the other way too and see what it is like being a producer, I've always had this dream of going into production, so I had to pray to God to provide the funds, at least to an extent to be able to go into it and finish it the best way and not stopping by the road side. And to God be the glory, I have finally completed the movie and will soon be hitting locations for another one in Ghana. Woman of Destiny, like movie buffs already know is a family movie with notable Nollywood stars like: Zack Orji, Emeka Enyiocha, Oby Edozieh, Chinyere Winifred, Obiageli Molube, Thelma Okoduwa and others. It's a big budget movie because I spent close to N4million of my personal funds shooting the movie, I've been planning for it for a very long time.

Even at that, many still have the view that it took you so long to come out with your own movie?

Not really, I've been taking my time and did not want to rush into it. I was actually enjoying what I was doing as an actress, even though I longed being a producer, I had to take my time and not a situation where I would rush into what I don't know. I like taking my time and making researches here and there before venturing into new fields. By the grace of God, I intend producing more quality movies.

We would like you to take us down memory lane on your career in Nollywood?

My first movie in Nollywood was The Last Hope in '96, but before then, I had been on TV as an actress. I was at home when my first movie script came to me. I started professional acting with NTA Tele movies in 1987, here in Lagos. Christian Onu, was my first TV director. After Tele movies I did Wind of Destiny, Dreams, Cradle, Blossom and several other TV soaps and series then.

So, you have abandoned the TV for Nollywood ?
Never, I have not, currently; I'm on TV working on Chico Ejiro's Treasures, only that NTA has not invited me for any soap recently, if they do, I will gladly accept, because that was where I started.

What fond memories do you still relish and cherish about your days at NTA?

A lot, I remember being paid about N100.00 (One hundred naira) for a lead role in NTA jobs then, not cash o! They usually give you a CBN cheque, which you will now cash at First Bank and also pay your tax from it. It was really fun then. I also wrote for Food Basket then on NTA, plenty fond memories that I can't begin to recollect now.

I will always thank Christian Onu, any day, anytime for discovering and giving me the opportunity for all these.

He discovered me in a Tele movie entitled Victim of Circumstance, where I played the lead.

Between soaps and movies, which comes first?
As a professional, I cherish both, even stage, they all come with their different challenges, but all the same, I still remember the days of TV, it used to be fun. But if I were to choose now, I would pick home video. It is so because this sector has grown and artistes earn good money also. We now get star treatment on set.

In what ways has acting impacted positively on your life?

A lot of ways, I can now go to places not everybody can because of my face. You are known and respected because of your famous face, a lot of people; especially youths look up to you as role model, a lot of benefits. Again, through my roles, I've impacted positively on my society and healed many troubled souls.

Like how many flicks have you featured in since you joined Nollywood?

I've done close to 100 quality movies.
And that makes you a millionaire?
If you say so, to God be the glory.
That also means movie-makers have raised the stakes in terms of artiste fees?

I will say yes because artistes now earn good money from movies, it is a welcome development but it could be better.

In retrospect, which among your movies would you say made you a household name?

I would give it to Glamour Girls; it was my role of Jessica in Glamour Girls that made me a household name in movies. Till date, most people still call me Jessica.

But do you have the intentions of going into public office in the nearest future?

Well, I would say yes, but have not decided the level at which I will serve my people. Even this 2009, my people are still calling me to come and serve them; I told them the time is not yet ripe. By God's grace, I will definitely go into politics and serve on a clean slate.

Are you aware that despite your fame, most people, especially your fans do not know much about you, kindly lead us into your background?

I'm Princess Tina Amuziam, from a royal home in Delta State, the fourth in a family of nine. I'm from Aniocha North LGA. I'm an adult. Every other aspect of my life, I would not want to make public, with due respect to my fans and the public.

Okay, but how do you cope with male admirers?
The point is that you can't crucify somebody because he is admiring you; you have to be polite with them, even though you don't want to jump at every admirer that comes your way. I get along with my male admirers and I give God glory always for taking extra time to create me, so I don't blame anybody who admires me. I also like making friends with people who like me. Even as a married woman, if a guy admires you, you simply tell him thanks and sorry because you are married and it ends there.

How close are you to your God?
Very, very close, in fact, I'm a born Catholic and currently run the Open Heart Prayer Ministries and NGO for women. I have a mandate to relate with women and discuss God with them, for me, it is a burden.

What motivates you?
I will still say God, because in whatever you do in this life, if you don't have God, you are a failure, that's the truth. I relate to my God all the time, He directs me, if I wake up in the morning I talk to Him, bed time, He also directs me. He actually motivates and inspires me everyday.

How do you want to be remembered by the time you finally exit the stage?

Like I told you earlier about my ministry, I want God to use me reach the women and children and impact on their lives positively. That is the first thing I want to be remembered for, I also pray to God everyday of my life to enrich my coast, so that I can reach out to people. You see a lot of people are suffering and I can't stand it and I think that's what God created me for, but I have not had enough to reach out to people the way I would want. I want to run a charity home that would take care of the less privileged so that tomorrow when I'm gone, they would remember me for something special. You saw what happened when Bimbo Odukoya died, youths were crying, in fact, everybody was crying. Wherever she is today with God and hears the cries of her loved ones, she would be happy, because she lived a fulfilled life.

Do you have regrets in life?
My only regret is that I'm too kind and people take advantage of it, but on a second thought, I have learnt not to regret it because I feel that is how God wants it.

What makes you cry?
The level of poverty in Nigeria today makes me cry, especially when I see some people go through rough times, which I feel they should not go through because of money, I cry. In fact, other people's problems make me cry.

What are your other plans this 2009?
Like I said earlier, first is releasing my movie, going to Ghana for another new movie, consolidating on my ministry, helping the less privileged through my NGO and also helping to shape the society through my movies. Above all, I want to be closer to my God and help win souls for Him through my good deeds.