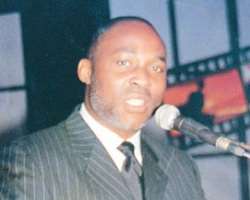 This year's event, which according to the organisers, is stuffed with high wire glamour with world class line up of events. It has as its theme, Consolidating the Phenomenon: Nollywood. BOBTV 2009 four-day event which holds at the Ladi Kwali Conference Centre at the Abuja Sheraton Hotel and Towers from March 8 – 12, 2009 will include among others, “Women in Movies” – Movies by women, for women about women, which will be hosted by Nollywood star and Delta State for Culture and Tourism, Richard Mofe-Damijo, says a release signed by Amaka Igwe, the festival director.

There will also be a workshop on Nigerian Content – Production, delivery and Pricing, as well as premiere of Ebuwa, an Edo state film on human trafficking and prostitution.

Delegate Dinner with the Honourable Senator Ayogu Eze is also part of the activities. Other events include, Manpower Needs & Development in the Media Industries , an international conference on digital capture and delivery; investment in Africa – financing the entertainment industry.

Seminar on film as a tool for national orientation will be handled by National Orientation Agency (NOA).Master classes, media and TV programmes production all will be part of the ceremony.

Nigeria First Movie Initiative – Yakadi Group, NTA & Bank PHB Awards for the Best of the Best Awards will be presented to Bukky Ajayi, Nkem Owoh, Okey Ogunjiofor, Lekan Ogunbanwo, and Zainab Bewell for their contribution to the film and TV industries.

Papers that will be presented during the four-day programme include, Nigerian Films and the Image of the policebyDan Esiekpe, a brand and image consultant; rehabilitating Nigerian women though motion Picture by Ngozi Anyaebunam, a media consultant. A paper on Man Power needs and Development in the media and entertainment industries will be presented by Eno Edet.