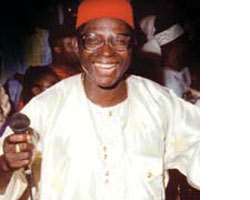 An exclusive gist reaching us has it that the management of O'Jez music ably led by Mr. Anayo Joseph Odobeatu, has signed emerging highlife musician Prince Chijioke Mbanefo. Mbanefo, famously known as Osadebe junior, is the cousin of the late highlife legend, Chief Stephen Osita Osidebe. Mbanefo with two albums to his credit, was also a prominent member of the defunct Osadebe band, till the death of the legend. He also played with Osadebe's son, Obiajulu, until his recent demise. Mbanefo, 31, immediately went solo with most members of the Osdadebe band and sings exactly like his late mentor, whom many usually mistake him for, due to their voice similarities.

“I have been with Osadebe since '99 and learning the ropes until his painful death. And my first album was a tribute to him. I hope to do more good works now that I have joined O'Jez music, because highlife music must not die.”