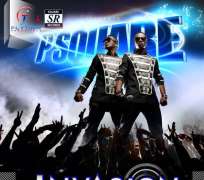 Few weeks ago, star hiphop pair Peter and Paul, commonly called PSquare gave supporters of music and fans all understanding of their latest album, titled Invasion as they staged the album listening party.While folk were jubilating and pouring convincing accolades to the twin brothers' stage performance and new words, smart eyes spotted plenty of blunders that were committed.

The 1st mistake happened when Paul who wished to mount the lectern thru the back had problems before he succeeded.

His leg slipped off from the iron and he dropped down, but he did not give up as he attempted continually. Finally , he succeeded and stormed the stage from the back, giving his audience an impression that he most have come down the roof top. This basically made chaos in the hall, professionally he followed up with different dancing moves.

This didn't last very long as his bangle costume, designed by a favored Nigerian fashion designer dropped off from his chest. With an expert touch, Paul tried to refix the glittering bangle ; it similarly failed as the costume required the awareness of the designer. After assorted unsuccessful tries to adjust his costume without enticing the awareness of his audience, he removed it utterly and threw it toward the onlookers and continued with the business of the day.