Why We Are Vociferous Against Justice Salami's Removal - ACN 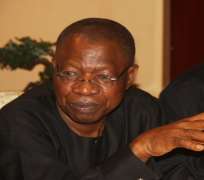 ABUJA, August 26, (THEWILL) - The Action Congress of Nigeria (ACN) has said its loud protestation against the illegal removal of Justice Ayo Salami as President of the Court of Appeal is driven by the party's principled stand on issues of constitutionality and the rule of law.

Reacting to the accusation by the PDP that the ACN is crying more than the bereaved on the issue, the party (ACN) said, in a statement issued by its National Publicity Secretary, Alhaji Lai Mohammed, in Lagos Thursday, that indeed, the PDP's characterization of the ACN's reactions on the issue is a gross understatement.

''We are not crying more than the bereaved. We are actually the bereaved, and we will cry for as long as it takes to restore strict adherence to the rule of law. We are bereaved when the Constitution of the Federal Republic of Nigeria is literally torn to shreds, as President Goodluck Jonathan did in acting on the illegal recommendation of the National Judicial Council (NJC).

''We are bereaved when the rule of law is supplanted with the rule of the jungle, as President Jonathan and the lawless NJC did in the controversial removal of Justice Salami,'' it said.

ACN said those who are surprised by the party's strong stance on the way and manner the whole crisis in the judiciary has played out either lack a sense of history or are being mischievous or both.

''Do these people, most of them from the PDP and its sympathizers, remember that the ACN, more than any other party, vociferously championed the transfer of power - in accordance with constitutional stipulations, to then Vice President Goodluck Jonathan when his boss took ill and was ferried to Saudi Arabia?

''Have they forgotten so soon that the ACN was stoutly at the forefront of those championing a peaceful succession - in accordance with the Constitution - when then President Umaru Yar'Adua died? Was the PDP not largely silent in those days when the power-hungry clique surrounding the late President brushed aside the sitting VP and illegally held on to power? Were PDP stalwarts not running to Saudi Arabia ostensibly to greet the ailing President, when indeed they were escaping from the mess created by the party at home?

''It is interesting that the PDP never for once accused the ACN of crying more than the bereaved during the sustained campaign for a constitutional transfer of power,'' the party said.

It reminded those who are raising eyebrows over the reaction of the ACN that the reason for the face-off between Justice Aloysius Katsina-Alu and Justice Salami - which culminated in the illegality committed by the NJC and the President - is the curious, unconstitutional and unprecedented arrest of the judgement on the gubernatorial election petition brought by the DPP against the PDP in Sokoto state, and had nothing to do with the ACN as a party.

ACN said as a party that believes strongly that a virile democracy can only be built on respect for the constitution and the rule of law, and as a party that has now emerged as the voice of the downtrodden, it will continue to cry against any recourse to arbitrariness, rule of the jungle and illegality by those in power, at whatever level.

The party reminded its traducers that it is in good company with credible bodies like the NBA, the NLC,the Commonwealth Bar Association the Minority Caucus in the House of Representatives, the media and indeed all well-meaning Nigerians, who have all spoken out vehemently against the unconstitutional removal of Justice Salami.

''Therefore, we will like to say that the griping about the ACN leading the opposition to the removal of Justice Salami is an unnecessary irritant, aimed at distracting us from our usual principled stand on issues, no matter whose ox is gored,'' it said.