Conversations with ‘Crazy Like a Fox’ Director - Tony Abulu 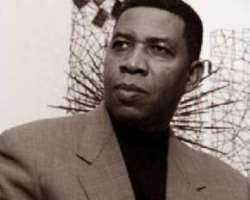 Crazy Like a Fox (released in 2008, watch the trailer ») is one of few movies directed by a Nigerian that has won global recognition. This film was one of the official selections for the American Black Film festival in 2008 and has been nominated for several awards as well.

I got a chance to sit down in Harlem with the director of this movie - Tony Abulu (Back to Africa, American Dream, Crazy like a Fox) and we got a chance to talk about his story behind the arts of film making. Tony Abulu is truly multi-dimensional — uses the arts to express several dimensions of creativity: beyond being the voice for the African film maker and artistic persons in New York, Tony has also been the voice for Nigerian film makers and producers, owned his own Pan-African magazine for ten years, and the list is endless. Enjoy the interview!

Tony, could you tell us a little bit about your background?

I actually started studying fine arts, graphic design and illustration in college and then I worked in a top ad agency in Nigeria between 1982 - 1984. I eventually left that company because I felt my creativity was eroding but before I left I started a magazine called Black Ivory which was basically ancient Africa in an illustrated form. Some will say that was when my foray into film making actually began. Black Ivory eventually became a major Pan African magazine in Nigeria and the United States and I was in that business for fifteen years (15).

What would you say actually took you into the world of movies and films?

The idea to make a film came in 1976 when I was in college. I started toying with this idea with a few friends of mine. At that time I was a martial arts instructor, so the script I wrote had major elements that incorporated martial arts. You have to remember that in 1976, there was nothing like that - there were only three or four people who made movies at that time in Nigeria and it was really grand scale and these movies were shot in 35mm. So we (my friends and I) tried to make this movie but it never came about. I will say that was my first foray into the world of films.

Beyond your background in martial arts - what other factors influenced your interest in movies?

You know this is very interesting because you see how African young children get into a form of art that is completely outside their 'norm'. Nigerians at that time, were looking very heavily into world cultures and we had the opportunity to imbue these cultures at an early age and as such many Nigerians at that time, were calling themselves by Indian nicknames - Jagu, Jatamaurta. The next influence was from Chinese movies like Bruce Lee. We were influenced by different Nigerian cultures as well. I know my Nigerian influence was via my grandmother who used to tell us stories - she was a top rate story teller. She used to sit us down at night and tell us stories about Ancient Nigerian history.

So, what event led to your first movie - Back to Africa?

About fourteen (14) years ago, at around the time that Eddie Murphy's movie, “Coming to America” came out, I wrote another script and I was determined to see this script through. My script was called American Dream.

I spent some months going after people like Ruby Dee, Ossie Davis to be in my movie. They all read the script and wanted to be in the movie but my budget was 1.4 million dollars and I spent four years trying to raise the money but couldn't do it.

Luckily, one of my very good friends, Obafemi Lasude came to my rescue. Femi Lasude was a Nigerian who used to work in a TV station in Brooklyn, we were both very passionate about entertainment in Africa. He eventually went back to Nigeria to pursue his passion further and he advised that I come back as well. At that time, I had written another script, which took me two days to write, called Back to Africa and I decided to follow Femi's advise and produce my movie in Nigeria.

Femi introduced me to a friend Larry Talbot with the hopes that Larry will invest in my movie. I met Larry and told him about my movie and that same day Larry invested 25 000 dollars in my movie. The only favor Larry wanted was that I take his son to Nigeria with me. So, I did my casting call and picked a couple of my cast from the U.S and then took them to Nigeria. We spent 6 weeks in Nigeria shooting that movie. We went to places like Ekiti, Oshogbo, etc to shoot this movie. By the time we got back and started editing the movie - people who saw it were amazed at the quality. That was the first Nigerian movie anyone ever saw in the U.S.

After that movie - I spent the next ten years developing distribution for the Nigerian film industry in the U.S and ironically to this very day - I get orders from all over the world for that movie. That movie cost about 80,000 dollars to produce.

You mentioned earlier that there was no form of distribution of Nigerian movies in the states when you produced the movie, Back to Africa - so how did you distribute your movies?

I made VHS copies of my movie and I went to every single store and restaurant in different communities from the Caribbean community, African community and the African American Community.

I went to Nigerian parties and other parties that I was invited to and set up a table and often times faced the initial jeers at the cost of the movies but people eventually started warming up to the idea and started wanting more of it.

During that time, I ran into two other Nigerians - the first one was Rabiu Mohammed - he had a small store in the Bronx ,where he used to sell movies. Today, he is one of the number one African movie distributors in the U.S and another guy called Bethel Agumoh. Bethel Agumoh was the first Nigerian to sell VCD on the Internet in the U.S.A.

The Film Makers Association of Nigeria (FAN) was made up of these two men, myself and Caroline Okoli who came through Bethel. Her forte was back end management - she had worked for McDonald corporation for some years. At that time, we had noticed that a few Senegalese and Malian traders were beginning to sell bootleg copies of Nigerian movies and we understood that if FAN does not legitimize the distribution of Nigerian movie where we ensure that people sell authentic copies of the real thing so that producers in Nigeria get some renumeration for the movies sold in the states - the industry could die.

At that time, Nigerian producers were selling 100,000 - 200,000 copies of their films. We took this issue to the Nigerian producers in Nigeria but they did not want to listen to what FAN had to say, they felt that we needed to prove that we were serious and had their interest at heart by putting down some money which we were not ready to do. Now, with the Chinese getting involved in the Nigerian movie distribution business - many now wish that they had listened to our suggestions. What is going on now is that a lot of Nigerian movies (as much as 50) are being compressed illegally into one CD and being sold and none of the monies are going to the producers, directors or anyone involved in the creation of the movie. Working with FAN as the president, I was able to convince 70% of distributors of bootleg movies in the states to become legitimate distributors of Nigerian films.

Beyond distribution of Nigerian movies, were there other issues that you were hoping that FAN will address?

Ultimately, the plan was to get involved in movie projects that tell the cross over stories. We wanted to work on Nigerian projects that can appeal to the American public as well. I think one of the things that Nigerian movie producers do not realize is that very few consumers of Nollywood movies are African American. We have a lot of 'buyers' from the Caribbean community, the African community and a couple of others. The reason that the African American community isn't buying into our movies is because they can't relate to it.

For example, the movie Back to Africa, tells the story of an African American girl that goes to Africa to find her roots and in the process, I integrate every day aspects of Nigerian life. It is a story that appeals to a lot of African Americans because at one time or the other, they had questions about their roots and where they are from originally. that movie is heavily bought into by the African American community but I can't say the same about a lot of other Nollywood movies.

You've definitely been in this business for a long time. What are the weaknesses that you see in the Nigerian film industry?

My main problem is the lack of authenticity in most of the stories told. I will call it the 'fakeness'. There are some movies that are a direct copy of American movies but even when they copy these movies, they refuse to put their 'Africaness' or should I say 'Nigerianess' into it. They use music that isn't theirs, they dress in ways that aren't really authentic. I think a lot of our movies are projecting images that aren't really African but rather African American and because those images aren't really ours, it makes it a difficult sell. If you do not really comprehend what it means to be African American then how can you project the image realistically and most importantly how can you support that image?

I have often said that if people believe that a certain culture is theirs then they should be able to support it. The way that the world works is that you have your own products that you create and you brainwash other people to buy into it. We need to learn our culture and find out what our own brand of products are and then sell it.

Extra:
There are a lot of issues within the Nollywood industry that were highlighted during this interview. Regardless of if we buy into his argument or not, Nollywood is an industry that will keep on growing and is one of Nigeria's main cultural exports. Our hopes are that this industry will become more recognized within the global film making community. Tony Abulu's movies are a must watch for any connoisseur of movies. I got a chance to watch - Back to Africa and Crazy like a fox and the quality and story telling were on point. You can get these

movies from Amazon.com, nollywoodtitles.com and other sites out there.