ACN HAS NO ROOT - ADESINA 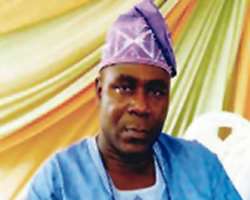 Mr. Samuel Adesina is the Speaker, Ondo State House of Assembly. In this interview with FRIDAY OLOKOR, he draws a comparison between ex-Governor Olusegun Agagu and the incumbent Governor Olusegun Mimiko.

What have been your experiences since you became Speaker of the Ondo State House of Assembly?

You were in the House during the administration of ex-Governor Olusegun Agagu and now Speaker in the government of Dr. Olusegun Mimiko. Can you give a comparison between the two?

Let me make one clarification: I was never a Speaker during Agagu's administration but just a member of the Ondo State House of Assembly. Dr. Olusegun Agagu is an academician and a theorist. He is a perfect man as far as theory and academics are concerned. He would have been extraordinarily useful if he returns to the classroom as a lecturer because he has the knowledge, wisdom and endowment of imparting knowledge into people. But he is not a good administrator. But for Dr. Olusegun Mimiko, even though he trained as a medical doctor, he is an administrator, a democrat and a revolutionary who is committed to the development of the people and the state.

How is the Labour Party and the government of Mimiko going to face the challenge of the Action Congress of Nigeria and its leader, Asiwaju Bola Ahmed Tinubu, in the governorship election scheduled for next year in Ondo State?

All politicians and political parties are always ambitious; even though they may not have more than one quarter of the majority votes, they will tell people that they have more than 100 per cent. The ACN is a party that has no root, no manifesto, no mission and vision and it's just like the amphibious plant in the sea which has no fibrous root; it only has a tap root. It only spreads on the sea and you will think they have occupied the whole sea. But a little movement of the waves will clear them off. That is my description of the ACN in Ondo State.

But don't you think there is need for the LP and ACN to come together since they may be pursuing the same political ideology?

I want to thank you for using the expression that they may be pursuing the same ideology. But I will say no; Ondo State is very distinct from other states and it will not dance to the tune of any hypocrite. We know the right thing to do at every point in time.

What is the relationship between Mimiko and the workers, since the government said it could only pay N14,000 as minimum wage?

It is very cordial; the minimum wage controversy has been resolved.