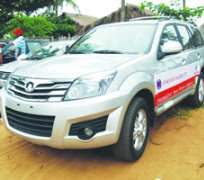 • Haval SUV
As the Chinese brands competing in the Nigerian auto market continue their foray into the mainstream, one nameplate is sending a signal that it is not out to be an also-ran, but a top contender, which has got what it takes, in form of products and relevant facilities to be taken serious. It is Greatwall.

A couple of years ago, the brand name might not have rung a very loud bell as a range of Chinese vehicles in the local market. But a distributorship deal between the manufacturers and the CFAO Automotive Group, is gradually changing all that in a remarkable way: A new member of the latter's large stable – CFAO CICA Nigeria Limited, which is the product of this partnership, is implementing an ambitious plan to be a major player in the market with the Greatwall flag!

And if there were still doubts in the market about its avowed commitment to the brand, CFAO CICA recently erased that by relocating its base to a more befitting, state-of-the-art '3s' (sales, service and spares) complex in Ogba area of Ikeja, Lagos, which features a modern showroom and an after-sales section (with workshop and replacement parts depot).

It is from this new home that sales and service of Greatwall across the 36 states of the country are coordinated, through a network which includes CFAO CICA's own branches and 15 sub-dealers who adhere strictly to the brand's and CFAO's standards and policies. It was also from this new, much-commended showroom that a long convoy of Graetwall passenger cars and pick-ups took off for a long test-drive through Lerkki xpressway to the Ereko Beach, on the outskirts of Lagos a few days ago.

But, beyond being a veritable opportunity for the motoring press to feel and rate the vehicles, CFAO CICA ended up with the extra mileage of flaunting the Chinese brand's offerings which are present in almost all the competitive segments of the local auto market. Another cause for the market to watch the new comer! And a good reason for the competitors in particular to keep glancing at their rear mirrors!!

Truly, the Greatwall vehicles the marketer lined up that Saturday morning, including Florid, a passenger car; Voleex C30, a midsize sedan that is being tipped to set off ripples in the market; Wingle pick-ups; and Haval SUV, turned quite a few heads and caused a stir at various points along the way. Confident of the quality of the vehicles his company is unleashing into the market, the Managing Director of CFAO CICA, Regis Tromeur, had earlier while introducing the vehicles to the guests, hinted to the journalists that the vehicles they were about to test-drive, had made waves of success in no less than 80 countries of the world where Greatwall exports them to (or produces them in).

And, since 2010 when his company started to market the vehicles in earnest, they have been making sustained impact in all parts of the country with strong presence in Lagos, Abuja, Port Harcourt, Calabar, Enugu, Warri, Ibadan, Ilorin, Kano, Kaduna and Maiduguri. Tromeur, who was with CFAO Automotive Group's Marketing Manager, Hapreet Arora, and CFAO CICA's Commercial Manager, Idris Siyaka, during the exercise, disclosed that In all these places, which are locations where the Group already maintains a stronghold, assurance of strong after-sales support including maintenance and parts availability is as reliable as day succeeds night.

According to him, to ensure that the same qualitative service are extended to customers and potential buyers in the rest of the locations covered by appointed dealers, the outlets are not just branded, but their after-sales service delivery is also brought up-to-date by training the workshop personnel and stocking spare parts. The aim, the guests were told, was to live up to the expectations of the customers and the CFAO Auto Group as well as meet the high standards set by Greatwall, which has the capacity to produce over 400, 000 vehicles a year with plans to raise it to 900, 000 by 2012.

'We (at CFAO CICA) are assessed by the CFAO Group, using the same yardstick for other brands', the Managing Director remarked, disclosing that the brand's pick-ups had held the number one spot in sales for 10 consecutive years in China. Not surprisingly, the Wingle pick-up which comes in single and double cabin variants, seems to be extending this streak to the Nigerian market. The product is already blazing the trail of success in the pick-up field, thereby giving a foretaste of what the Greatwall siblings can do in other segments.

Available in 4×4 (luxury) and 4×2 double cabin As well as 4×2 single cabin, Wingle is today occupying the fourth spot among the competing offerings in the local market, about one year after CFAO CICA formally entered the market with the Greatwall product line-up. This was confirmed by the managing director.

Also part of the test-drive to Lekki were the 1.3 litre Florid, available in both automatic and manual transmission; Vollex C30, powered by a 1.5 litre petrol engine mated to either a manual or automatic transmission; and the top-of-the-range Haval, an SUV that gave a good account of itself while the test-drive lasted.

Driven by a 1.5 litre engine and a manual transmission system, Haval made quite a number of friends along the way, attracting admirers in the Lagos traffic with its a esthetically alluring looks. The automatic version, according to Siyaka, will be due for introduction in the country soon.