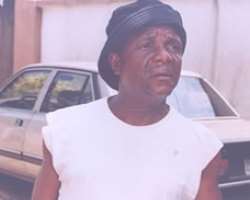 Perhaps the story of theatre practitioners in the country would not be complete without the inclusion of total artiste, Victor Eze Okuchukwu. Fondly called Alika, a sobriquet he got from his role as a poor man in the rested edition of Fuji House of Commotion, die hard Okuchuku is one talented artiste that started out as a dancer who later became an actor, writer and movie director. He has featured in many home videos, stage plays and dance performances within and outside Nigeria.

The seasoned dramatist who is doing everything within his power to make information and training a priority in the sector also believes that lack of training and information is the bane of the home video industry. He took http://nollywoodgists.com round his world of the arts.

Foray into the theatre
I started as a traditional dancer with masquerades. But when I moved to Benin, I became a professional dancer, after which someone introduced me into acting. I also tried my hands on writing and subsequently obtained a London Diploma in Writing. That was how I started growing until I established my own dance company. I traveled to Spain and Italy and later worked for the defunct Bendel State Art Council.

I then moved to Lagos and joined Moonlight Culture, a dance group. Incidentally, we lodged in a place called Moonlight Hotel for about two years. We operated as a professional company, first of its kind. Later, I gained admission to Obafemi Awolowo University where I studied Theatre Arts and upon graduation. I started my own company, Vickezo Production Company. I also went into dance and administration and helped set up the Ijodee Dance Company, which belongs to Adedayo Liadi.

I built the company for about three or four years alongside my own. I went into teaching the young ones as a resource person in an international youth art development programme. We now concentrate on art administration, dance, music, drama, film production and direct marketing alongside other things.

Behind the screen
I have given my 30 professional years to the industry aside from my year as an amateur. Before the movie industry started, I was a multiple award winner for the stage; having won about four different awards as best actor, most disciplined actor, and most versatile actor. So when movie came, some of us were reluctant about it because the way people were pumping into it led to poor standard and unnecessary proliferation. I thought the only way to contribute meaningfully, is to go into my training program and then take part in some of the movie productions. I have been involved in television programmes for about 18 years and I got that role of Alika because of what popular filmmaker and Director, Amaka Igwe saw me do on stage. I have also taken part in some movies, including Widows, Mouth to Mouth written by myself and directed by Emeka Obiako, Beyond Reason, which I featured along Kanayo O Kanayo but written and directed by Ernest Obi among others.

But getting regular jobs became a problem for me, not because I am expensive but because I am reluctant to belong to a certain circle in the industry. But I believe this is not moving us forward. And I am reluctant to join them. Some have come to my office to challenge me asking what my problem is by refusing to join them. I was asked to feature regularly in their films but I simply refused because I believe certain roles are not just for anybody to play. You must get specific professionals and such persons must be unique in such roles.

So when it became obvious that professionals like us cannot afford to celebrate mediocrity, the video and theatre arts went comatose.

Stagnation in the industry
We have a lot of opportunists; people who are not supposed to be in the industry. A lot of them came in as directors, producer, marketer, actor s and crew- members. When they are in such circles, they determine the direction of the industry, and this is unfortunate. They didn't undergo any formal training, neither did they know much about the industry; they just want to make money.

I belong to over 20 Hollywood network groups, and each time I purpose an idea to some of them, the reply would always be; 'How is your Hollywood now'? I take that as an insult. However, I just take it upon myself to educate and enlighten them that Nollywood is not nothing wood as they think. There are some professionals who have refused to come out and that is part of the problems of the sector.

Now, we are building a new Nollywood, we are starting all over again, but there is no money. The banks want us to put money and some people went to the bank and robbed the bank, just the same way some people were collecting money from foreigners in the name of 'I want to do a classic African film. 'They collect millions of dollars but they have never done anything realistic.

The way forward is training and re-training. The associations and guilds should embark on training; they should raise funds to send people abroad for training. We also have to buckle up and clean up our records so that this issue of 419 will no longer be associated with us.

Government of course has a role to play but unfortunately the agencies are not doing as much as it is expected of them. I think the Ministry of Culture and Tourism should come out and embrace filmmaking.

They should help to set the pace because we need to speak with one voice. If there is a division in the industry, we will not go anywhere. We practically need an umbrella body so that it will speak and have a body that will go into Aso Rock and request for what we want. They should look forward to setting up guilds and associations.

People are also using the guild to embezzle money; they are using the guilds to travel out of the country, they don't have any solid plan for the industry and then we are involved in what we used to do during traffic jams-everybody wants to go, but nobody wants to give anybody a chance. We need retraining and re-orientation.