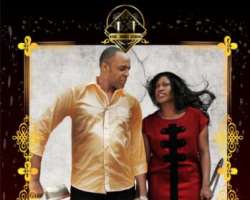 Following the tremendous success that the movie 'Damage' has been recording at the cinemas and the outpouring of accolades that it has received from movie lovers, the executive producer Uche Jombo has come out to say that she is proud at the turnout for 'Damage' at the cinemas.

Uche Jombo who also acted in the movie alongside Tonto Dike, Basorge Tariah Jr and Kalu Ikeagwu, were all in the Garden City of Port Harcourt for a meet and greet with fans which turned out to be an unforgettable occasion as the fans trooped out in large droves to interact with their favorite stars.

The movie 'Damage' presents the case of love and domestic violence in such a manner that has never been seen in a movie before. 'Damage' is about the story of a man (Kalu Ikeagwu) and his wife (Uche Jombo) who loves each other immensely, but their way of presenting this love to each other is by engaging in violent fights almost on a daily basis, and this has a serious psychological effect on their children.

When asked how she felt about her work, Uche Jombo stated, I am very proud of what we have achieved, there is no better word to describe how I feel when I see the turnout of people coming to watch the movie and am sure that all those involved in the production of the film would definitely feel the same way.