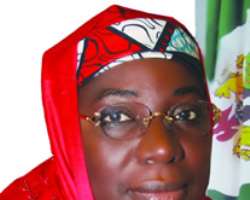 Rufa'i made the remark when she received a delegation from the African Union Commission (AUC), led by Prof. Jean Ezin, the Commissioner, Department of Human Resources, Science and Technology, AUC, Addis Ababa, in her office in Abuja. She gave assurance that the Federal Government would ensure the smooth take-off of the institute before the end of 2011.

According to her, necessary logistics had been put in place for

the launch of the institute while the country had always made

a regular budgetary provision for its smooth take-off.

'The Federal Government is ready to ensure that Ibadan University becomes a centre for excellence not only for Nigeria but for Sub-African regions,' she noted.

'To this end, regular budgetary allocation as well as high impact interventions have been put in place and budgetary provisions, which amounts to N5.5 billion have been sunk into the project, out of which N3 billion will be used for all infrastructural requirement while N2.5 billion will be used for the development of a zonal laboratory situated at the University of Ibadan as well as a special intervention of N1.6billion for upgrading power supply.'

The institute, from reports gathered, has thematic areas in all regions on the continent and constitutes areas, ranging from basic technology, innovation, water, energy, earth and life sciences, which are to be situated in East, North and West

African regions. Others include space and governance, human and social sciences to b e

located in South and Central African regions.
Speaking on the occasion, Ezin stated that the delegation was in the ministry to intimate the minister on the proposed take-off of the institute and urged the minister to

appoint an acting director, who would co-ordinate its activities.

Also, the Executive Secretary National Universities Commission, Prof. Julius Okojie, assured the commission of the country's readiness to provide the enabling environment as well as the leadership to ensure the successful translation of the university into a Pan-African University even as he said it would serve as a model to other universities in the country and other African countries.

Necessary for the smooth take-off of the institution, Okojie noted, is a 200-bed hostel, which he said was currently under construction at the university. He also noted that greater efforts had been put in place to upgrade the electricity supply in the university as that was the only deficiency observed by the team from AUC when they visited the institution.

The Pan-African University, the executive secretary said, would be responsible for producing more PhD graduates for other universities in the country.

Also speaking on the occasion, one of the delegates, Beatrice Ijaga, described the establishment of Pan-African University as the brain-child of the Heads of Governments of all African countries and noted that it must be subject to its vision and mission, which encompassed peaceful, integrated, prosperous Africa, driven by Africans to take its rightful place in the global community.