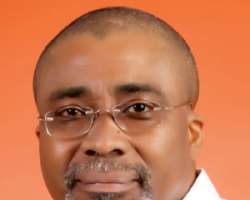 The well-equipped health centre is one of such that was attracted by the former Deputy Governor who is now a ranking senator of the Federal Republic of Nigeria representing the senatorial district.

Bemoaning the lack of basic amenities for citizens especially those that live in the rural areas, Abaribe promised the people of the area more projects to improve their standard of living.

Abaribe’s effort put a lie to insinuations that by going on their annual vacation, activities of most members of the National Assembly will be on hold.

That not being the case, some of them are using the holiday period to connect with their constituencies and continue in their representation of such.

Nonetheless, Senator Abaribe stated that though this project was captured in the 2009 budget, he ensured that it was fully funded in the 2010 budget to be certain that it was completed.

It would be recalled that the Ibeme community was one of those infested with the kidnapping bug in the recent past that led to serious security problems in both states of Abia and Akwa Ibom. The kidnapping saga led to the burning down of the neighboring village of Abala by the Nigerian police, which also led to the intervention by Senator Abaribe to bring in the National Emergency Management Agency (NEMA) who brought in relief materials to the area. It was during that intervention that Senator Abaribe promised to attract a functional federal government health project to the area.

Senator Abaribe also commissioned five installed and functional 500kva electricity transformers in various communities in Aba and Obingwa two of which are located in Aguwa ward 2, Aba North and Alaoma in Obingwa. The people of the various communities who defied the heavy down pour to besiege the venue of the events were full of praises and admiration for Abaribe and thanked him for keeping to his promises to the people of the district.

The traditional ruler of Ibeme ancient Kingdom where the health center was built, HRM Eze A.D Onwukwe was most elated and full of praises saying he and the entire people were not at all surprised over the performance of Senator Abaribe so far in the Senate as his track record are eloquent testimony.

He promised on behalf of the community to support the government in the maintenance of the health center.

To ensure proper and timely maintenance, a management committee of the Health Center which has 24 beds both male and female wards with generator and overhead water tanks were inaugurated by the Hon Commissioner of Health, Abia State who was represented by the Permanent Secretary, Ministry of Health, Mr. Emenike.

Similarly, the traditional rulers of Aloma and Aguwa communities, HRM Eze Augustine Ogidinta and Chief George Ogbonna Nwosu, thanked the lawmaker for the electricity projects, which according to them came at the most appropriate time when the people were becoming increasingly agitated that the government may not come to their rescue after a long period without electricity power.

The five transformers are part of over 45 transformers attracted by Senator Abaribe, which have already been delivered to Abia south communities comprising six local councils.

Speaking at the occasion, Senator Abaribe said the donation to the communities were to reduce the power problems in Abia south adding that it is part of his legislative agenda, which includes rural development and empowerment.

He further added that in the 2011 budget he had ensured that 24 communities in Abia South will get power transmission materials worth about N190 million adding that PHCN has already advertised the tender for the contracts two weeks earlier to enable speedy completion of the projects before the end of the budget year of 2011.

Abaribe however, advised the residents of the Aguwa area where there is a growing erosion menace to furnish his office with the details of the problem for onward transmission to the Federal Ministry of Environment.

In a related development, Senator Abaribe was a guest of honor of the Dr Rowland Ubani-Ukoma Memorial Lectures organized by the Nigerian Medical Association, Aba Branch that instituted it to honor the late Ngwa Medical Icon who was a pioneer staff of the Abia State University Teaching Hospital Aba.

The lecture delivered by another prominent Ngwa son, Barrister Chibuike Nwokeukwu attracted prominent personalities in Abia including Dr Anagha Ezeikpe, Dr Joshua Ogbonnaya, Dr Enweremadu, Chief Macauley Nwankwo, Elder Emma Adaelu, Chief Godson Evulukwu and the widow Chief Ahurue Ubani-Ukoma and the son who incidentally is a medical doctor Dr Chidi Ubani-Ukoma. Senator Abaribe announced an annual prize of 100,000 Naira for the best student in the quiz competition, which was part of the highlights of the occasion.