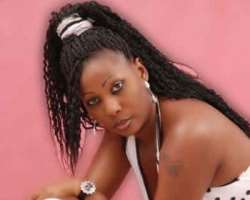 Although her film Save Our Souls was nominated for various categories at Zulu African Film Academy Awards, ZAFFA weeks back during its grand party, few people discovered that the beautiful actress refused to grace the red carpet or step inside the hall.

Insiders later revealed to us that the budding movie producer who had her breakthrough over 4years back with the movie entitled, The Earth, stormed the venue on bathroom slippers.

Close pals who know her as one of the actresses who make style statements disclosed that she has foot abscess that accommodated only soft foot-wear few days before the nomination party. To show respect and honor the organizers of the award,Oby still went out of her way to be present at the event even on bathroom slippers.

As if that was not enough, on Sunday penultimate week, the leggy film maker shunned the paparazzi again at Silverbird Galleria during the premiere of Uche Jombo's Damage movie.

On arrival at the venue, she boycotted the star studded red carpet, rushed upstairs and refused to come closer to other Nollywood babes who graced the occasion