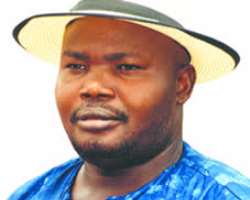 • Evah
Is he an alarmist or a true patriot? Since he broke into national limelight during the crisis that trailed the annulment of the June 12, 1993 presidential election by the military dictator, General Ibrahim Babangida, he has succeeded in carving out his own brand of activism.

For some time now, the national coordinator of the Ijaw Monitoring Group (IMG), Comrade Joseph Evah, has authored an advertorial series in the media entitled 'Niger Delta warns against setting Nigeria on fire.' The serial, in the words of the fiery activist, is an investigative and factual rather than a spurious report on the activities of a tiny but powerful cabal that is uncomfortable with the reality of power shift in the country. And he is unyielding on this self-imposed cause.

Evah speaks on this; on Boko Haram and what Vice President Namadi Sambo should do; the controversy trailing the proposed Islamic banking (for which he was unsparing of Christian leaders opposed to it) as well as on the controversial revelations of incarcerated Major Hamza Al-Mustapha before a Lagos High Court. Excerpts…

The Ijaw Monitoring Group has been running an advertorial in the newspapers titled: 'Niger Delta warns against setting Nigeria on fire.' What is the motive?

(Laughs) Well, that is our own version of the famous whistle blower, WikiLeaks, that publishes and exposes diplomatic dispatches and other secret dealings of world leaders. The series, which has reached part seven, is IMG's version of the WikiLeaks before, during and after the constitutional crisis that trailed the death of President Umaru Yar'Adua. Through it we regularly exposed the moves and antics of the cabal that was in the presidency.

All characters working against the Constitution in order not to empower Jonathan as Acting President were investigated and their activities exposed for Nigerians to know what was happening. Nigerians were given regular briefings on the various plots, where meetings were held, including the next move of the cabal to stop Jonathan at all costs.

Go back and check whether anything we had said has not come to pass. Those who make such criticisms do not know what we know. I can tell you that through our alerts we have succeeded in checkmating some of the evil plots of the cabal working against our people and this country.

What is your reaction to the controversy generated by President Goodluck Jonathan's six-year single term proposal for president and governors?

Before I answer your question, let me say that the Yar'Adua cabal that was dislocated by Jonathan's emergence has started regrouping. They sponsored the emergence of the current Speaker (of the House of Representatives) with the assistance of a former Nigerian leader.

At a recent meeting attended by senators, Reps members and ministers removed from office when Yar'Adua died, one of the northern governors told the gathering that Jonathan's popularity rating had dropped below 25% since he came up with the proposal. They have nominated contact groups and their plan is to ensure the bill fails when it gets to the National Assembly and they would move a motion for the impeachment of Jonathan.

The plan is to heat up the political space so that Jonathan will use the beginning of his tenure to fight for survival. One of the late Yar'Adua's aides and an arrowhead of the cabal that sponsored senators to disregard the Constitution in the struggle to empower Jonathan as Acting President is currently playing a double game. Those at the meeting sent congratulatory messages to the NBA (Nigerian Bar Association), the Conference of Nigerian Political Parties and others already considering Jonathan move as a hidden agenda.

The plot is for Northern political leaders comprising serving and former governors, senators, House of Reps members, retired military officers, who met in Abuja, to perfect a strategy to crush Jonathan presidency before his four-year tenure expires. The meeting was held at the Abuja residence of a serving northern governor. They adopted strategies that were aimed at outwitting the single term bill and at the same time move a motion in the House of Reps to impeach Mr President.

Those present were representatives of a former military ruler and a former vice president for the role their bosses played in defeating the PDP choice and that of the President during the election of the Speaker of the House of Rep. At the meeting, coordinators assigned to the six geo-political zones to find out the feeling of the people regarding the single term proposal of the president presented their reports, which according to them, showed that Jonathan popularity had dropped below 21%. Therefore any attempt to move a motion to impeach him in the House of Reps would not face any obstacle from the masses. The coordinators therefore urged those present to pull resources together and recruit more opinion leaders across the country as well as the lawmakers.

The gathering also gave kudos to those still close to Mr President but are committed to the objective of the new arrangement and that they should continue to give the President wrong advice in order to rubbish his popularity. The main characters very close to President Jonathan but working for the opposition were not physically present but were represented by their aides.

The group admitted that it will be difficult to impeach the President because of the stiff constitutional requirements but they all agreed that it is another way to heat up the political space so that Jonathan will use the beginning of his tenure to fight for survival and eventually waste his years in office. They said it is the best way to force him to abandon any move to remain in office beyond 2015 and that if they push harder power will return to the North through Namadi Sambo. Once that happens it will be goodbye to zoning or any other arrangement that will bring back power to the South.

Most of the ministers and political office holders during the days of Yar'Adua promised the forum that money for the anti-Jonathan campaign is not a problem to them. They added that the campaign to kill the bill in the National Assembly should be straight forward, that President Jonathan wants to remain in power like Mobutu Seseseko or the Zimbabwe president, and that Nigerians should rise up and save the nation from Jonathan.

My fear is that some of these people have their agents that are very close to the president. The same people will go back to the National Assembly pretending to be helping the president and ask for settlement of many senators and Reps members. Ministers and other public office holders will bring billions out from their contracts to settle lawmakers in the name of working for Mr President while such monies are being used to torment the proposal of the president.

We wish to warn these manipulators to allow Nigeria survive. The bill is harmless. They can throw it out if the National Assembly wishes to do that but to sponsor lawmakers to move for impeachment of the president is a joke they are taking too far and our region will resist it. I just hope the Niger Delta leaders will put on their thinking caps. Unfortunately, our political office holders who see their new offices as paradise on earth are not helping matters. I hope God will help us.

Some northern leaders have been blowing hot over the issue of Islamic banking and Boko Haram continues to cause tension in the country. What is your take on these?

I expect the CAN president, Pastor Oritsejafor and his co-General Overseers to do something about the rate of unemployment in the country. Look at the colleges and the universities churches are establishing, but the graduates from these institutions are not getting jobs. Can't churches build industries to employ their graduates? What are the churches doing with the billions of naira in their bank accounts? They have jets to fly all over the world, can't they provide jobs? Let them clear the forest, build industries and employ their members roaming about aimlessly. It is not enough to tell them that their miracle is on the way.

I want the CAN president to use his influence to meet with the governors of our region and other leaders to save Oceanic Bank. That bank is going and many Niger Deltans will lose their job. The bank idea came from our people but it is facing crisis that wants to kill it and Pastor Ayo Oritsejafor is folding his hands. It is a shame if that bank dies.

On Boko Haram, President Jonathan should ask his vice president to mount camel or donkey and go to Maiduguri. When Yar'Adua was alive he asked Jonathan as vice president to enter canoe and paddle to Oporoza town where Camp 5 was located to discuss with militants to bring peace to Niger Delta. So I am begging our president to direct Architect Namadi Sambo to climb the back of a donkey or camel the manner Jonathan entered canoe and go to Borno State. If that is done, Boko Haram bombing will stop. They will consider the humility of the vice president and give peace a chance.

When I talked about this on the television, somebody who claimed to be an aid of the president called me and said I have been barred from the presidential villa. I just laughed. But I am repeating it now because I want a double ban (laughs). I told the person that when I started going to that presidential villa, when Babanginda and Admiral Aikhomu were in government, to talk about Nigeria's matter, some of them were not even known beyond the desk in their office.

What do you make of the drama that has been playing out on the Major Al-Mustapha trial in court?

I am against the continued detention of Major Al-Mustapha but I am not impressed about some of the things he has said like Afenifere sold out on June 12. I know that he is faking frustration. Is he saying that Afenifere leaders asked Babangida to annul the June 12, 1993 election? In every crisis, leaders are invited to talk. Even during the Nigerian civil war, the major characters were talking and they even went to Ghana to talk peace.

His testimony shows that the talks between Afenifere and Abacha were sanctioned by Abiola himself. In fact, it was the talks that made some Yoruba leaders like Jakande to get involved in that government and which kept Abiola alive for that long otherwise Abacha would have killed him before he died. When Abacha saw that the arrest Abiola at Epetedo did not cause war, the next thing was to eliminate Abiola and the Yoruba would have rioted for a few days. But the Afenifere leaders were wise enough to open the channel of communication to keep Abiola alive for extra years.