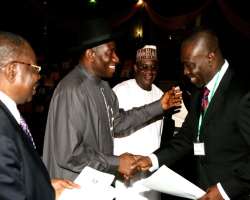 ABUJA, August 11, (THEWILL) - The Deputy President of the Nigerian Senate, Senator Ike Ekweremadu has emerged the new Speaker of the Parliament of the Economic Community of West African States, the ECOWAS Parliament.

Senator Ekweremadu who was unanimously adopted by the Nigerian delegation was also returned elected for a four-year tenure by all the 87 members present following the inauguration of the Third Legislature of the ECOWAS Parliament by the Nigerian President and Chairman of the ECOWAS Authority of Heads of State and Government, President Goodluck Jonathan in Abuja.

In his acceptance speech, the new Speaker of the ECOWAS Parliament promised that his leadership would be anchored on mutual trust, respect, consultation, transparency and accountability.

Senator Ekweremadu who commended the role of the Parliament in fostering democracy and good governance in West Africa, stressed that the ECOWAS Parliament needed to move to a higher status and called on the ECOWAS Authority of Heads of State and Government to accelerate the processes of making the Community Parliament a full-blown legislative institution.

He decribed the absence of any traces of military dictatorship in West Africa as a visible evidence that democracy has finally come to stay in the sub-region, but reminded his colleagues that democracy was not an end in itself.

"The end of democracy should be development for the Community and better life for our people through good governance", he emphasized.

On the work ahead, the new Speaker urged his colleagues to be ready for more collaborative work with other ECOWAS institutions and organs of ECOWAS to find speedy answers to the many challenges facing the sub-region.

"We must collectively face the issues of human rights, justice, poverty, health, education, peace building, deepening the roots of democracy, and catalysing economic development through industrialization and increased volume of intra-regional trade which still stands at a very low percentage compared with trade between individual member states and Asian, European, and American interests", Ekweremadu reiterated.

He said the Standing Committees of the Parliament must also be up and doing in working with all institutions and organs of the Community to ensure that ECOWAS consolidates the path of zero tolerance for bad governance, injustice, impunity, corruption, coup d'états, and blemished electoral processes, saying they were the true roots of conflict, instability, and underdevelopment in West Africa.

Espousing further on his leadership agenda, the new Speaker said his vision for the Community Parliament remained that of an institution that thrives on legislative best practices, high ethical standards, total commitment to the peace and development of the sub-region as well as one that is truly the voice of the people and attuned to the challenges and aspirations of the citizens of West Africa.

Ekweremadu further stressed the need to make the ECOWAS Parliament a true voice of the peoples of West Africa, promising to take it to the grassroots.

"It is my foremost task to take this parliament from a seemingly far-removed international institution to one that lives among the people and rooted in their consciousness", Senator Ekweremadu added.

He however noted that such proximity and synergy could hardly be achieved unless the ECOWAS Parliament first synergised with national parliaments of ECOWAS member states and promised to open a new chapter in the relationship between the Community Parliament and the national parliaments based on the agenda and programme of this legislature as contained in the Strategic Plan.

Senator Ekweremadu also promised to build on the achievements of his predecessors by ensuring that the remaining Focal Point Offices were not only set up in the remaining member countries, but that they were also fully capacitated to run as veritable bridges between the Community Parliament and the national parliaments, and by extension the citizens of ECOWAS.

The Speaker observed that the world has continued to contract into a smaller global village, and urged his colleagues to open a new chapter of inter-parliamentary cooperation, stressing the need to explore new frontiers for new partnerships while working to consolidate existing ones to promote the economic, social, and political interests of ECOWAS.

He therefore craved their support, team spirit and wealth of experience saying his leadership would be open to all. "I will be your servant and you will be my masters.

Meanwhile, the Nigerian delegation who paid the new Speaker a courtesy visit in his new office at the ECOWAS Parliament immediately after his inauguration pledged their total support for his leadership.