IS IT PERMISSIBLE TO FAST WITHOUT PRAYING? 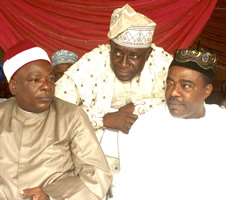 Praise be to Allah.
No good deeds will be accepted from one who does not pray - no zakah, no fasting, no Hajj or anything else.

Al-Bukhaari (520) narrated that Buraydah said: The Messenger of Allaah (peace and blessings of Allah be upon him) said: 'Whoever does not pray 'Asr, his good deeds will be annulled.'

Shaykh Ibn 'Uthaymeen was asked in Fataawa al-Siyaam (p. 87) about the ruling on the fasting of one who does not pray.

'But if they repent [by rejecting Shirk (polytheism) and accept Islamic Monotheism], perform As-Salaah (Iqaamat-as-Salaah) and give Zakah, then they are your brethren in religion'

This is also the view of most of the Sahaabah, if not their consensus. 'Abd-Allaah ibn Shaqeeq (may Allah have mercy on him), who was one of the well-known Taabi'een, said: The companions of the Prophet (peace and blessings of Allah be upon him) did not think that omitting any action made a person a kaafir, except for prayer. Based on this, if a person fasts but he does not pray, then his fast is rejected and not accepted, and it will not avail him anything before Allah on the Day of Resurrection.

We say to him: Pray then fast, because if you fast but do not pray, then your fast will be rejected, because acts of worship are not accepted from a kaafir.  The Standing Committee (10/140) was asked: if a person is keen to fast in Ramadan and to pray in Ramadan only, but he stops praying as soon as Ramadan is over, does his fasting count?

They replied: Prayer is one of the pillars of Islam, and it is the most important pillar after the Shahaadatayn. It is an individual obligation (fard 'ayn), and whoever does not do it because he denies that it is obligatory, or he does not do it because he is careless and lazy, is a kaafir. With regard to those who fast Ramadan and pray in Ramadaan only, this is trying to cheat Allah, and unfortunate indeed are those who only acknowledge Allah in Ramadan.

Their fasting is not valid if they do not pray at times other than Ramadan, rather this makes them kaafirs in the sense of major kufr (kufr akbar), even if they do not deny that prayer is obligatory, according to the more sound of the two scholarly opinions.