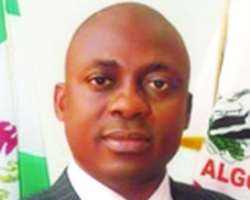 No independence
We have had a lot of challenges as far as local government administration is concerned. As a local government chairman and as the National President of ALGON, I have seen all the problems from every nook and cranny and we have been making efforts to see how we can get out of the problems, which local governments across the country are currently facing.

There are times that you will find out that for a local government to do any project, the council chairman has to go to the state to seek approval. If the governor does not like his face or he does not have interest in the project, he may not approve it for him. So, who is to blame if the project is one that would have touched the life of his people or raise the living standard of his people? Are we going to blame the chairman or the governor or the state government? So, that is our major problem.

Apart from that, the ability to generate funds among the three tiers of government, is very weak at the local government level. The juicy ones and those that are easy to collect are shared between the state and the federal government.

The ones that are very difficult to collect, like the rates from motor-parks, where we have to pursue Agbero (garage touts) from one end to the other; bicycles licence, wheelbarrows licence, cemetery fees and abattoir charges are left for the councils. And how much are we going to raise from these areas? So, councils find it difficult to raise funds to be able to pursue their responsibilities.

Overload of responsibilities
Also, the federal and state governments, at times, shirk away from their responsibilities as spelt out by the constitution. You discover that local governments end up buying cars and vehicles for the Nigeria Police to enhance security because they want the lives of their people to be secured. But primarily, that is not the duty of the local governments.

So, I don't see that account as a joint account. It is a state account. The state governments are supposed to take the allocation and give the local government its own share, but they will not. We say the labour of our heroes' past should not be in vain but it is becoming in vain.

ALGON versus Governors' Forum
Most of the governors see ALGON as a threat but we are not supposed to be a threat. We are supposed to be partners in progress. ALGON is still there as it was when it was formed in the beginning. But just like I said, local government is like the creation of the state. So, the governors are becoming conscious everyday of the cooperation and togetherness of the chairmen. So, probably they try to discourage it.

I even know some states where their governors would not allow them to participate in ALGON activities. What is wrong in sharing ideas? If some groups host local government chairmen from other states and your chairmen want to participate, why should they be denied the opportunity? So, they (governors) are afraid that probably our togetherness or cooperation may create problem for them, which is not supposed to be. We are supposed to be partners.

Illegal removal of council chairmen
It also buttresses what I have been telling you all along that, local government third tier of government, is not being given that recognition. Just like a ministry where the state government can sit down and say a person in the ministry is not doing well or he has done this and that or cook up an allegation against such person, and before you know what is happening, the person is suspended from office. That is the way state governments are also doing to the local governments.

But, it is wrong. The president of this country cannot just sit down in his office and watch the National Assembly removing a state governor. So, also it is not a good thing or a good system for state government or a House of Assembly to sit down and see that a chairman is removed from office, if we see the local government as the third tier of government. It is totally wrong.

Then, find out why in any state governed by a particular party, the local government chairmen in such states will come from the political party where the governor comes from; all of them. Are they saying other parties do not exist in that state, that it could not win a local government nor even a councillorship position? So, it is not true.

So, you can see that the system is structured in a way that the local government is being more of an affiliation to the state.