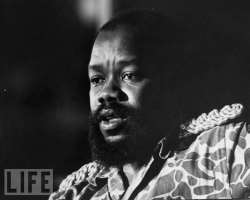 
AKWA, August 10, (THEWILL) - The Ikemba of Nnewi, Dim Odumegwu Chukwuemeka Ojukwu is alive and still responding to treatment in London, THEWILL can report.

Multiple sources Wednesday told THEWILL that the reports on various social media are all false.

The Anambra State Governor, Mr Peter Obi via his Assistant on Media and Publicity, Mr Valentine Obieyem described the rumours of Ojukwu's death as being orchestrated by "enemies of Igbos wanting to create bias amongst the people." He said the Biafran General is "alive and doing well in the hospital", adding that "Ojukwu will not die when God has not said so.

Dim Ojukwu was admitted into a London hospital a few months ago after suffering a stroke.