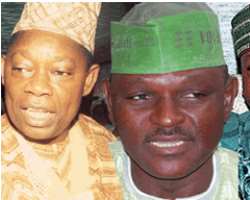 Former chief security officer (CSO) to the late head of state, General Sani Abacha, Major Hamza Mustapha on Tuesday made a u-turn on his earlier statement that some Yoruba leaders visited the former military head of state, General Abdulsalam Abubakar shortly after the death of Chief MKO Abiola, winner of June 12, 1993 presidential election.

Mustapha answering question under cross examination by the prosecutor, Lawal Pedro (SAN), admitted that he could only recognize only two members of the Pa Abraham Adesanya-led National Democratic Coalition (NADECO) that visited the seat of power. Pedro asked him whether he (Mustapha) was aware that those that visited Aso Rock at the material time were in actual fact members of NADECO and not Yoruba leaders as he had earlier told the court in his evidence-in-chief and that Arthur Nwankwo a notable member of the opposition group was a member of the team.

He accepted the correction and concurred that those that were involved in the trip in question were 'NADECO elders'.

The former CSO and one Alhaji Lateef Shofola are facing murder charge in a Lagos High Court sitting in Igbosere over their alleged role in the June 4, 1996 assassination of Alhaja Kudirat Abiola, wife of Chief MKO Abiola.

Similarly, he admitted that he was not in possession of any video record or any hard evidence where money was actually handed over or shared among the NADECO chieftains who undertook the trip under reference.

Answering further question he also admitted that he was not physically present where Chief Abiola was given the 'killer tea' in the presence of both American officials and their Nigerian hosts at the presidential villa, Abuja.

Mustapha: 'I was there technically but physically I was not there.'

As a result of the admission that he was not physically present when Abiola died, Pedro told the court that all the defendant/witness had been telling the court about the death of Abiola were nothing but mere hear say. But Mustapha insisted that he had the tape of the scene but could not produce it to the court because it was among the several tapes carted away by the Abdulsalami's agents when he was arrested.

On the death of General Abacha, Mustapha admitted that he was not there to witness his death. The CSO who confirmed that General Abacha died on June 8, 1998, added: 'I was not around when he died, but I saw him around 2am with some ministers and ambassadors,' he said.

Meanwhile, both Mustapha and Shofolahan had been given the go ahead by the court to appeal against the decision of the court which refused their no case submission in its ruling of July14, 2011 in which the third defendants, Rabo Lawal was let off the hook by the court.

The trial judge, Justice Mojisola Dada, granted the leave sought by the defendants on the ground that they had the right to appeal the decision of the court.

According to the judge, 'In view of the fact that the defendants have right to appeal, this court would have no choice than to rule in favour of the applicants.

'Accordingly, the two applications seeking leave to appeal the ruling are hereby granted.'

The two motions seeking leave to appeal the ruling on no case application seeking the order of the court to discharge and acquit the defendants on the murder charge preferred against them refused by the court was argued by their counsel, Olalekan Ojo.

Al-Mustapha also said, 'We agreed that all detainees are to be set free and that was done. But Abiola was kept perpetually in custody. The question then is why?'

The CSO added that former head of state, General Abdulsalami Abubakar, declined to appear before the Oputa panel because of some sensitive issues raised at the panel.

He maintained that Abacha was murdered but declined to make further comments because that was not the issue before the court.

He also posited that, 'I did not order the arrest of any political figure in the country during the administration of Abacha but I sent Rabo Lawal to confirm the act of burning Abacha's property in Lagos and not to checkmate the activities of NADECO in the state. In fact, it was the Garrison Command in Lagos, led by retired General Patrick Azazi that was directed to take over protection of the said property,' he said.

On who made the order for the arrest of MKO Abiola, the embattled CSO clarified that it was the then Inspector General of Police (IG), Alhaji Ibrahim Coomasie who ordered his arrest, with an explanation that he even signed the warrant of arrest.

Al-Mustapha, who confirmed that all attempted murder and murder took place under the regime of Abacha, urged the court to order General Abubakar to return all documents carted away from his house while he was in detention. He also challenged the police to produce the report on the investigation of the murder of Kudirat.