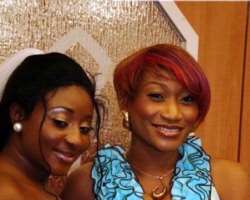 There are seems to be no end to the raging fury rocking the once solid friendship that was between two top actresses Ini Edo and Oge Okoye.

It all started as a mere disagreement between pals that could have been easily resolved had their egos not played a fast trick on them.

We gathered trouble set in after the list of movie stars who were selected as Glo Ambassadors was released and Oge didn't make the list while her best friend whom is alleged they both worked together to procure the endorsement deal,scaled through.

A hint of betrayal crept in and both distanced themselves from each other. It was then alleged Ini had a hand in Oge's removal from the final list that produced the Ambassadors.

The new status did not also help matters as the Ambassadors became like Gods who pride themselves as a special breed of movie stars and as such, stylishly built a wall around them.

This further tore them apart as Ini Edo felt more at home with her new set of classy friends.

Obviously bitter by the whole scenario, it was alleged the light skinned actress was behind the abortion tale that trailed the dark skinned actress as it's said to be a very private issue only someone close to the actress could have divulged to the press.

All fingers pointed towards Oge's direction and that fuelled the rift.

Both finally went the opposite direction without looking back until when news broke recently that Ini is angry with Oge because of the story in town that Oge was getting too close to Ini's husband.

It was after the story that their paths crossed recently at a movie location in Festac.It was gathered Oge spoiled for a fight when Ini allegedly accused her of having an affair with her husband,an allegation that got the fair skinned actress infuriated and both tore at each other.