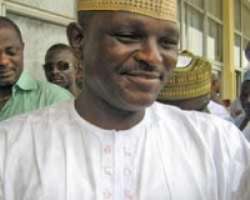 Denies Strike Force role in Kudirat's murder
Accuses NADECO leaders of insincerity
IN the thinking of Hamza Al-Mustapha, the real enemies of Chief Moshood Kashimawo Olawale (MKO) Abiola will never be brought to book by any government in Nigeria.

He told the court yesterday in Lagos that Abiola's enemies and others, who championed the annulment of June 12, 1993 presidential polls, which most Nigerians believed he won, are 'untouchable' because they are highly placed persons.

The former Chief Security Officer (CSO) to the late Head of State, Gen. Sani Abacha, also revisited the role of the National Democratic Coalition (NADECO) in the annulment of the election adjudged as being free and fair.

Al-Mustapha said contrary to the widely held opinion that NADECO led the most formidable opposition to Abacha, it was the military that gave his late boss sleepless night over the June 12 saga.

He said NADECO leaders were insincere on the actualisation of the mandate given to Abiola because they were into double talk.

At the resumed trial of Al-Mustapha over his alleged role in the murder of Alhaja Kudirat Abiola, wife of the murdered MKO at the Lagos High Court yesterday, Al-Mustapha said he sent a former member of the Strike Force, Rabo Lawal, to Lagos to protect the property of Abacha, which were being threatened by the NADECO-led protest and not to kill Kudirat.

Under cross-examination by the prosecuting counsel, Mr. Lawal Pedro (SAN), Al-Mustapha, whose supporters besieged the court premises, denied ordering the killing of Kudirat. He said when he heard about her death in the media, he contacted Abiola and commiserated with him over the incident.

Still on the NADECO chiefs, Al-Mustapha claimed that what they said in the public was different from what they told Abacha at meetings with him.

For three days last week, Al-Mustapha had told the court the roles played by some eminent Yoruba leaders and other Nigerians in the death of June 12. He also claimed that he knew the killers of Abiola and Abacha. Al-Mustapha said some of the Yoruba leaders collected money in foreign and local currencies from former Head of State, Gen. Abdulsalami Abubakar, to compromise on June 12 and abandon Abiola.

Asked yesterday who ordered the arrest of Abiola, Al-Mustapha said it was the then Inspector-General of Police and that he (Abiola) was kept in Police custody until he began to complain about the conditions there.

Al-Mustapha said he later became responsible for Abiola's custody and took good care of him. 'I became responsible when he complained about the Police. I was the one feeding him. I spent N800,000 quarterly to feed him. Those who stood against Chief Abiola are in 'high places' in this country and can never be brought to book.'

On the admission of a leading member of the Strike Force, Sergeant Barnabas Jabila, alias Rogers, that he shot Kudirat on the orders of Al-Mustapha, he (Al-Mustapha) said it was untrue, claiming that Rogers had confessed that what he said was dictated to him under duress.

Al-Mustapha further told the court that he admitted that he ordered the killing of Kudirat due to the torture he went through at the Special Investigation Panel (SIP), adding that he acted the way he did so that he could be given the liberty to go to court as well as to meet his lawyers, whom he could not see for a year.

'I appeared last before the SIP on October 13, 1999 after severe torture that I will never forget and my statement to them was like a visa they needed to begin my prosecution. It was under duress that I made it. If the prosecution had seen the torture we were subjected to and the condition we were, they would never have prosecuted this case,' he said.

He showed the scars in his stomach, which he claimed were as a result of the torture he went through.

Al-Mustapha alleged that the statement dictated to him by the SIP was used to bring him to Lagos for trial. 'It was a dictation. I decided to do that so that I would be sent to court or the prisons so that I can see my lawyers. For one year, I could not set my eyes on my lawyers or members of my family,' he said.

He denied knowing the late Pa Alfred Rewane and Gen. Perboni, who were also killed during Abacha's junta but admitted knowing the Publisher of the The Guardian, Mr. Alex Ibru, whom he said was known to him because he was a minister under Abacha. He said that Pa Anthony Enahoro was a father to him.

According to him, the late elder statesman was always communicating with him in the prison before his demise. 'Pa Enahoro was a father to me. Until he died, we were communicating', he said, adding that he never ordered for the killing or arrest of all the eminent citizens mentioned.

Al-Mustapha said as the CSO to the head of state, he was not a member of the Military Ruling Council and was therefore not privy to any security decisions taken to arrest anybody.

He maintained that had he belonged to the body, he would have resigned or acted differently on the decision about certain issues that would have saved him the trial he now faces. He disclosed that the Strike Force was a creation of National Intelligence Bureau in March 1995 and that its members did not take orders from him.

Al-Mustapha said the Strike Force had the primary responsibility of protecting Abacha from attack while the bodyguard was mandated to stay with VIPs at the Villa. He said that he was only interested in their routine functions, insisting that the Strike Force was not trained in Korea but at home.

The cross-examination continues today.
Author of this article: By Joseph Onyekwere