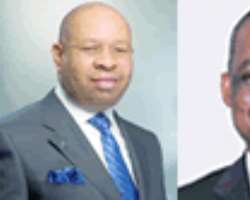 Operating below capacity was the best expression to describe the situation of the three nationalized banks as customers besieged their branches in mad rush for cash Monday, the first working day after their takeover by regulators last weekend.

Investigations by Daily Sun show that, apart from lodgement and withdrawal, other banking functions have been suspended till further notice as the new bridge banks are still grappling with logistics for their effective operation.

This notwithstanding, reports from Port Harcourt, Kaduna, Ibadan to Calabar indicated that customers greet the revocation and take-off of the bridge banks with mixed reactions.

Lagos
At the Akowonjo branch of what used to be Bank PHB, the banking hall was jampacked by customers who came in droves for normal business of deposit and withdrawal. Pasted conspicuously for the customers to see was the notice of the new development, which reads thus:

'Door notice of Transfer to Keystone Bank Limited - The Nigeria Deposit Insurance Corporation (NDIC) in expressing its powers under Sections 38(1)(c) and 39(1) of the NDIC Act, in consultation with the Central Bank of Nigeria(CBN) and by a Purchase and Assumption Agreement dated 5 August, 2011 hereby notifies the public that all the deposit liabilities, certain other liabilities and all the assets of Bank PHB Plc, effective on the 5th day of August 2011 have been transferred to Keystone Bank Limited.

The creation of the Keystone Bank Limited allows for the continuation of normal operating services withminimal disruption. Inquiries concerning assets and liabilities of Bank PHB may be directed to Keystone Bank Limited at V The Situation was almost similar at the Oshodi branch of former Spring Bank, except that only few customers were seen doing business at the banking hall a when Daily Sun visited the bank. At the Customer Service unit, our reporter gathered that account opening and other operations, apart from cash lodgement and withdrawal, have been suspended till next week as letterhead and logo of the new bank as well as other vital documents are still being awaited,

At both banks, their old names are still intact and conspicuously displayed.

At Kirikiri, customers of KeyStone Bank (formerly BankPHB Plc) considered the action of the regulators in transferring the assets and liabilities of the three rescued banks to Bridge Banks as a well calculated move to avoid sudden collapse.

At the Airport Road branch of former Bank PHB ,some customers said they had rushed down to make withdrawals on the belief that the banks would be congested, but on getting to the bank's premises, they discovered that there was no rush and changed their minds. At the Matori branch of former Afribank where normal banking business went on, a customer, Pastor Benson Eze, told Daily Sun that he was not worried because he had got information that CBN put more money into the banks so that no depositor will lose money just like it did in 2009.

Umuahia, Abia State
The three banks were working like every other day. At Spring Bank around Okpara Square , customers were seen going in and out of the bank as if nothing happened. When Daily Sun visited the bank, a security officer, who spoke anonymously , said that the bank has no problem.

'You can see that customers are being attended to. We don't have any problem.The only thing that has changed is the name of the bank, which does not matter at all. Operations are still going on and customers are still  being attended to. There is no problem with our bank.The same situation is noticed at Bank PHB and Afribank, where Daily Sun did not notice any unusual crowd inside or outside the bank premises.

When Daily Sun visited the branches of  Afribank, BankPHB and Spring bank at about 3pm yesterday in Kaduna metropolis, some customers were seen paying in, while others were seem withdrawing money as usual.

Mallam Hussaini Baba told our repoter in one of the banks that he was in queue to receive his money as he was panicked by the situation and therefore he would be withdrawing all his deposit immediately.

According to him, his mind was not at rest. His words: ' I'm telling you the truth, the money I have here was meant for community work in my area.'

A visit to the two affected banks that were available in the state [Bank PHB and Afribank] showed that banking business was as usual, customers were seen depositing and withdrawing in their respective banks in the state.

Panic withdrawal in Minna
Despite concerted efforts made by the new managements of the three banks recently taken over by government to douse tension on the takeover, customers in Minna, Niger State were seen rushing to make panic withdrawals from their accounts.

For example, the church council of the Cherubim and Seraphim Movement  No 1, located along Yoruba Road met after the service on Sunday and decided to suspend further lodgment of the church money into its account in one of the three banks 'until the situation stabilizes'.

Some of the customers seen to be clearing their accounts were invited to the offices of either the heads of operation or the branch managers of these banks who wanted to know whether the withdrawals were panic measures or normal withdrawal.

Although the old signposts of the banks have been removed, their  new names have not been hanged.

At the Afribank head office in Area 3, Abuja , Daily Sun discovered that depositors were frantically withdrawing money. It was also observed that its signpost has been removed. The same applied to Bank PHB and Spring Bank offices in Abuja .

Yenagoa
Some customers of the three nationalized banks were anxious over their funds on Monday. At the two branches of the Bank PHB in Yenagoa, the mood among the workers was calm as they discussed the development.

Kano
A mild anxiety characterized activities at the banking halls of the various branches of the three nationalized banks operating in Kano State as some of their customers and staffers adjusted to the ownership changes of their brand.

Calabar
It was business as usual at the branches of the three newly-acquired banks in Calabar Metropolis, Cross River State capital, as customers were seen at the premises of the banks carrying out normal financial transactions.

Abeokuta
It was business as usual for hundreds of customers of Keystone Bank,

Against the expectations of many customers, the bank opened for business with anxious customers storming the financial institution. The branch located on Obafemi Awolowo, Ibara was a beehive of activities with customers either making deposits or withdrawals from the multi-storey bank.

At the Main Street, formerly Afri-Bank,  on Lalubu, Oke-Ilewo, anxious customers who got the news of the change in the management of the bank stormed the bank as early as 7.00a.m. to make enquiries about the news which many of them said caught them unaware. A long queue of customers were noticed at the banking hall of the Main

Lafia
Bank PHB, Africa Bank and Spring Banks all have opened to customers in Nasarawa State for operation on Monday.

Investigations conducted by Daily Sun revealed that the three banks were attending to customers as early as 8:00am and many customers interviewed said they were not aware of the directive by the Central Banks not to operate.

Warri
Customers to the re-named Afribank, PHB and Skybank went home disappointed yesterday as hundreds of them could not make with drawal following the uncertainty surrounding the three financial institutions.

Investigation conducted in the three banks located in Warri and Effurun respectively, revealed an ugly situation as customers complained openly over the constraints they were facing in with drawing their savings.

Majority of them wept bitterly and expressed fears that they may not get their money again.

Ilorin
There was a total apprehension by customers of banks that had its license withdrawn by the Central Bank of Nigeria (CBN) yesterday in Ilorin.

DAILY SUN investigations revealed that despite the withdrawal of their licences the bank still open for customers and their environments were calm.

Ibadan
Despite last weekend directive by the Nigerian Deposit Insurance Corporation (NDIC), that operations of Afribank, Spring Bank and Bank PHB have been taken over, businesses activities in some branches of the banks visited by Daily Sun in Ibadan , the Oyo State capital went on unabated.

Lokoja
The decision of Nigeria Deposit Insuarance Corporation- NDIC to take up the management of the three distressed bank was greeted with mixed feelings in kogi as there was panic withdrawal of funds in some of the affected banks in the state.

Checks on  the Bank PHB located along IBB way lokoja shows that as early as 8.am yesterday customers trooped to the bank to withdraw their deposits.

The subsequent acquisition of assets of the Afribank, BankPHB and Spring Bank by the Asset Management Corporation of Nigeria (AMCON), came as surprise to stakeholders   who are grappling with shock. Checks by Daily Sun at the three affected banks showed that there was unusual cash withdrawal by customers.

Uyo
The change of names of the three banks has not substantially affected their operations in Uyo, Akwa Ibom state as customers of the banks were seen depositing and withdrawing money in a very relaxed manner.