LACK OF ACCESS TO FUNDING KILLS ENTERPRISES IN NIGERIA - ENGR.YISA 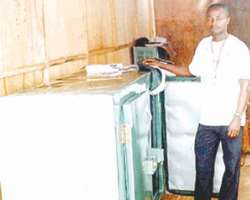 The average Nigerian is said to be hardworking, intelligent and resourceful, ready to impact the economy positively but one thing that has been a barrier is lack of basic infrastructure. The desire of every Nigerian is for government to provide the basic tools; and the private sector will do the rest.

So Nigerians are ready to do whatever is necessary to make Nigeria great but the government must provide the necessary infrastructure and make the environment conducive.

In a recent chat with Vanguard at the just-concluded Eko Xpo Trade Fair in Lagos, Engr. Rabiu Yisa, Managing Director/Chief Executive Officer of Yor Technical Company says apart from lack of infrastructure, accessing funds from banks to do business is almost impossible.

ventured into the job market in search of the ever elusive job. After searching without success, he decided to study cooling systems. He had his training in Osun State for two years.

•Engr. Yisa… I approached a bank for loan, unfortunately, the interest rate was too high so I abandoned the idea

At the completion of the training, he started his own company, Yor Technical Company where ice block-making machines are manufactured.

The company is also into installation and servicing of air conditioners, cold rooms and all cooling systems.

Narrating how the journey started and has been so far, the Kogi State-born engineer said: 'I have been in this business for three years now. After the training, I sourced for funds from family and friends. I was able to raise N450, 000 with which I started the business.

I started in Oshogbo, Osun State where I have my first workshop. Because of the relative stability in power supply in Oshogbo, we were able to make enough money to open another workshop in Lagos. So I have two workshops now.

'Even where we are in Lagos, power supply is also relatively stable. It has improved. On the average, we have about seven to eight hours of electricity supply a day.' He hopes to open more workshops as funds become available.

Yisa said the good thing about the business is that most of the raw materials like aluminum sheets, copper files, compressors, evaporator etc. are all available locally.

On their mode of operation, he said: 'We produce machines of different sizes and display and customers buy and sometimes place special orders. We get our customers through visiting offices or attending trade fairs such as this one.'

He said his clients include individuals and groups. He declared: 'We have some customers who form a group, an association or a cooperative society, and buy in large quantities and distribute to members. Presently, we have many such customers.'

He stated that he had approached one of the commercial banks for loan to expand his business but unfortunately, the interest rate was too high so he had to abandon the idea.

He, however, noted that he will appreciate a situation where individuals will want to partner with him to move the company forward.

'We want to expand but that requires finance. Right now, we have seven employees made up of three engineers and four administrative staff. We need more but cannot afford that now.'

He said prices of the products are determined by cost of production. 'On the average, we spend about N50, 000 on diesel a month,' he added.