THE HOMECOMING OF MIRROR BOY 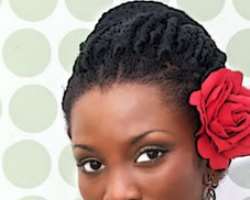 Genevieve Nnaji
For delectable actress, Genevieve Nnaji, playing the lead role along side popular movie star, Osita Iheme aka Aki of the 'Aki and Pawpaw' fame in a new flick, Mirror Boy was the biggest fun of her life.

Indeed, according to the producer, Obi Emelonye, Genevieve fits the role because of her passion to bring out the depth of emotions that fits her character, and so it was easy to cast her.  And for Osita Iheme, Emelonye chose him because of the way he looks in relation with the other members of the cast with whom he was to have family relations in the movie.

'I also chose him because I knew he would bring a certain cheekiness, a certain mischief to the role, and he did, the result of which was that for the first time in his acting career, he was nominated for an AMAA award as Best Supporting Actor,' the producer says.

Mirror Boy has generated much attention both in the UK and Africa. Shot at locations in Gambia, it is a film that is already expanding the frontiers of Nollywood. Starring two of Nigeria's best, the movie in a most interesting manner, reveals the identity crisis and cultural confusion experienced by most children in the Diaspora.

Inspiration
For Emelonye, few films are told from the perspective of a child, and even the ones that try don't achieve it very well. According to him, the initial attempt was to tell a story that could interest a child, a story from a child's point of view. And what kind of story would that be? His response: 'I watched my seven-year-old son grow up in London. At school, he is a British citizen, at home he is a Nigerian, and for some kids, it can be very confusing especially if they have no father figure to help the child know where they are from. For a single mother, by the time she is through with all the things that have to be done, she is too tired to even mention anything about Africa. So, most of these children are suffering from an identity crisis. Therefore, I wanted to use a story of this boy who gets repatriated back to Africa, Gambia in this case, to explore the concept of the identity crisis and the disconnect between people born in Africa, and people born in the Diaspora.'

The story
Mirror Boy actually tells the story of a London-born-and-bred African boy, who gets repatriated back to Africa by his mother because he was involved in a fight. He experiences what he thought was just an apparition in the mirror when he sees a little boy that later disappears, but seeing the same little boy in a crowded street market the next day sets in motion a chain of events that cumulate in him going missing. So, now he has gone missing on his second day in Africa, and his mother is using the slightly inept unprofessional police to find him but meanwhile, he is lost in the company of this mirror boy who is only visible to him. The mirror boy takes him on a journey through the depths of the forest, and the next day he emerges a different boy, kind of grown up overnight, and it helps him to understand things that have happened in his life, and helps him to understand the connection with the father that he has never met.

CNN's thump up
Mirror Boy is an engaging piece of entertainment that is bound to bring about some reshuffling in the Nigerian cinema records. Perhaps, this is the reason the American Cable News Network (CNN) tipped the movie as the future of Nollywood.

Homecoming
As Mirror Boy hits cinemas across the country after being premiered at Silverbird Galleria in Lagos yesterday, critics have guaranteed that its success at the box office will surpass that of Ghana and the UK. In fact, Mirror Boy was the first African movie ever to be premiered at the Empire Leicester Square in London, and it survived at the British cinemas for weeks, coming up among the Top 5 in the first week and Top 12 in the second week. It equally had a mind-blowing effect on the Ghanaian movie buffs thus making it the highest selling Nigerian movie in Ghana.

On its homecoming, Emelonye says: 'I am really looking forward to the arrival of Mirror Boy at the cinemas in Nigeria. It is a homecoming for Mirror Boy and the amount of support and accolades we have been getting shows that I am not the only one excited about the movie, Nigerians are too. The movie is a product of a Nigerian mind, so it is a Nigerian film by all means. One strong principle we adopted all through the production of this movie is quality, and this is why I am confident that the success of Mirror Boy internationally will be doubled here in Nigeria, because contrary to what a lot of people think, Nigerians love quality.'