The wine served at Cana was fermented, so it was alcoholic - Nomoloss 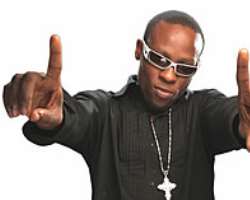 The Iyawo Olele famed Nomoloss disappeared from the music scene only to make a surprise comeback as the manager of Weird MC, Gbenga Adeyinka, the 1st and others. He spoke with TADE MAKINDE on his projects. Excerpts:

Nothing much has been heard from you for a while, what's going on?

I've been chilling and working on few projects. I have involved myself in some musical projects, working on a movie, doing my own production, and I am planning to launch my artist management outfit before the end of this year.

What's your interest in movie production?
I'm a versatile artist. Movie, music, comedy, even sports, I do have a considerable interest in anything entertaining.

Is it a home video?
It's going to be a musical movie.
Why artist management?
I have grown tired of sitting and complaining about what needs to be done to make our music industry an organised and standard one when I know I can do it. I intend to make a difference by doing what needs to be done.

Are you saying this is more lucrative than singing?

Well, I'd say no. But for me, managing an artist is more fulfilling because I will be contributing to making stars, help develop their talents. I get a thrill doing that.

How were you able to get Weird MC on your outfit?
I've been part-managing her for years. I helped her to sell Ijo Ya, offered advice whenever she needed it and have been part of her success. So, it just happened, one could say, because we finally decided to make the relationship formal this year since I've been working with her for long.

Is it true that she's difficult to work with?
People may say I'm biased to say she's OK because I work with her, but that's the truth. She's an easy going person, the simplest I've ever known. I think she's been misunderstood because she's a thorough professional.

That, to me, is not a problem. Because most people cannot deal with creative people, like Weird, they say she's difficult to work with. She places much on brand worth, an area that most artists compromise. She'll never compromise, just as I never will.

Does she throw tantrums?
Every creative person does. Even me. When someone who does not know anything about anything won't stop questioning your judgement on what you know, you will be livid. It's natural.

What do you need to manage an artist successfully?
Firstly, it is God. I am not saying this because I'm a believer, but because music is a favoured work. Music is from God, not just anybody can sing. It's also not just about skill, else all skillful musicians would be known. For any musician that's known, such a one is favoured. It's not an easy thing for people to accept you just like that, you must have been favoured. Secondly, you need to understand the artist and the terrain, then, you must painstakingly, and carefully, nurture the talent. Don't ever assume you know the talent you work with because there will always be good and bad days and you need wisdom to handle the situation. You need to bond with your act so you two could have a partnership that works.

If you were still singing, do you think you'd have been endorsed by one of the corporate organisations?

I still sing. Right now I'm working on two albums that will be released before the end of this year. But, like I've said, I'm now more into management. I see it as a brand tool.

Would you say your outfit is already there, or on its way to getting there?

As a man thinketh, so he is. We are there and we are getting better by the day because we understand that an artist has demands, temperance and so on, and we always make sure we are a step ahead of them because we are partners. We see what our artists don't see.

What do you have to say about artists who want to be everything all the time?

It's the economic situation that's to be blamed. International artists don't do that. Again, we don't have the structure in place here. If most of them had any choice, they wouldn't be bogged down with combining all aspects if there was a structure in place. Sadly though, we can't help it for now. It's a pity.

What's the meaning of Nomo'loss?
Aah, it's a deep thing, a big thing o. I'm trying to let people know that I never see obstacles along my way, only opportunities. I take setbacks to be God's avenues to make me a better person.

No matter what happens, I don't believe anything is lost. That walk with God is profitable, no matter how long it takes. And as far as God is concerned, there's an appointed time for everything. Again, Nomoloss is Solomon spelt from the back. I've not lost out on anything. Simple.

You talk about God a lot, yet you smoke. Can smoking land you in hell?

Jesus said it's not what you eat that makes you go to heaven or hell, but your heart. God is not after our works, otherwise He wouldn't have called David a man after his heart. David committed adultery and murder, yet he was pronounced a man after the Judge's heart. You know why? Because he had a submissive heart. He would fast, pray, sing, dance, each time he realised he had messed up. At the end of it all, he would do the will of God. Whether I smoke or not will not be God's reason that I'll make heaven or hell, but my heart condition. The first miracle where water was turned to wine, who told you that Jesus' wine wasn't fermented? I'll tell you it was because the Bible records it that they drank and were merry. Wine is a symbol of joy, those people merried on fermented wine. So, who says fermented wine is not alcoholic? Even Paul said he consumed all things, but was careful not to come in the way of those whose faith were not strong. I smoke, I don't drink. Whether one smokes or drinks has nothing to do with eternity, it's the heart.

In your opinion, whose songs has changed the face of Nigerian music in the last one year?

It's a tough one men, but it would have to be 9ice because he has shown that being 'local', as many people call our songs, has an international flavour. I only hope he'll be able to sustain his success. But then, he has opened the gate for others who don't believe in our own. It can be done, whether you sing in Efik, Ijaw or Hausa.