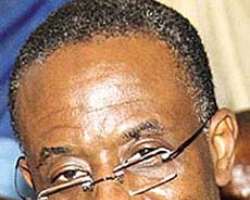 CBN Governor, Lamido Sanusi
The cashless economy being proposed by the Central Bank of Nigeria would begin in Lagos State, the Federal Executive Council announced on Wednesday.

The Minister of Information, Mr. Labaran Maku, stated this to journalists after the FEC met in the Council Chambers of the State House, Abuja, where the Governor of the Central Bank of Nigeria, Mr. Lamido Sanusi, made a presentation on the state of the economy.

Maku, however, did not state the exact time when the cashless policy would commence.

He, however, noted that in line with the plan, the Lagos State Government was expected to immediately start using e-banking services.

He said, 'The CBN has decided to start the cashless economy in Lagos, using Lagos as the hub, and has taken up partnership with the governor of Lagos State.

'In a few months to come, Lagos will move swiftly into e-banking and there is also the initiative to introduce mobile banking across the country.'

The proposed mobile banking system, he said, would cut the cost of running banks by about 30 per cent.

The CBN governor reported that the rescued banks had until September 30 to recapitalise.

Shedding further light on the CBN report on the state of the economy, Maku said it had so far grown by 6.4 per cent in 2011.

'The CBN report stated that the economy had grown at the rate of 6.4 per cent and overall growth projection for this year was put at 7.8 per cent,' the minister said.

A breakdown of the report, which suggested that the country's economy was performing very well, showed that real Gross Domestic Product growth was estimated at 7.4 per cent and 7.93 per cent for the first and second quarters of 2011 respectively, with the oil sector growing at 2.90 per cent and 3.4 per cent within the period.

Non-oil sector growth was estimated at 8.46 per cent and 8.77 per cent for the first and second quarters respectively.

The report said the non-oil sector growth was largely driven by agriculture, wholesale and retail trade, and services, which contributed 1.92, 2.13 and 2.39 percentage points respectively.

Crude oil production (including condensates and natural gas liquids) increased by 8.76 per cent to 2.11 million barrels per day within the same period.

Estimated capacity utilisation in the economy rose marginally by 1.56 percentage points to 57.87 per cent, driven largely by business confidence, cement and oil.

Food and non-food commodities contributed to the deceleration recorded in second quarter.

In summary, the report stated, 'Overall, the performance of the domestic economy remained robust.'

However the dismal performance of the manufacturing sector stuck out as a sore thumb in the generally cheery report.

According to the report, the 'share of manufacturing is dismally low at not more than six per cent of the total GDP.'

Manufacturing GDP growth was estimated at 6.02 per cent and 7.3 per cent in the first and second quarters of the year.

The report said the 'policy thrust for the rest of 2011 would be to ensure optimal supply of liquidity to key sectors of the real economy to achieve non-inflationary economic growth.'

The FEC also approved a draft bill to empower the National Universities Commission to enforce standards in tertiary institutions.

Maku said the current NUC Act did not provide penalties against contravention of sets of standards in the university system.

The absence of penalties was identified as a major reason for the continued presence of illegal degree awarding institutions.