No Bail For Suspected Killer of Boko Haram Leader 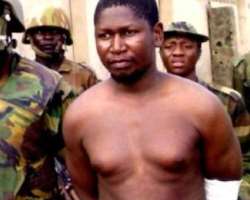 ABUJA, August 01, (THEWILL) – Sergeant Adamu Gado, one of the five persons docked for the alleged killing of the leader of the radical Islamic sect, Boko Haram, Ustaz Mohammed Yusuf, has been refused bail by a Federal High Court presided by Justice Donatus Okonkwo.

Gado, who was remanded back in prison custody had prayed the court to admit him to bail to enable him organize himself for trial.

But Justice Okonkwo in refusing the bail application said his decision was based on the confession made by Gado to the police where he admitted to shooting and killing Yusuf, adding that the material evidence presented by the prosecution could not be ignored by the court.

“Having listened to the submissions of both parties, I am convinced that the interest of justice is better served in refusing the application than granting it. I therefore refuse the application for bail,” Justice Okonkwo ruled.

He however berated the prosecution for withholding the crucial evidence when the court approved the bail application of the other four accused persons.

The court thereafter adjourned till October 24th and 25th, this year.