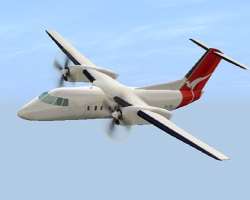 SAN FRANCISCO, August 02, (THEWILL) – The Cross River State Government Tuesday clarified reports in the Nigerian press following its purchase of an aircraft from the Rivers State Government for the purpose of operating commercial flights to and from the Obudu Ranch and Resort.

A statement by the Cross River State Commissioner for Information and Orientation, Mr. Patrick Ugbe said the aircraft was purchased for $6m as against $9m as reported in local papers.

The statement reads: “Our attention has been drawn to a story in Nigerian Newspapers of Wednesday 27th July, 2011, crediting the Governor of Rivers State as saying that Rivers State Government sold one of its 3 aircrafts to Cross River State for $9 million.

The Governor of River State made the statement while responding to allegation of purchasing of new aircraft by River State Government.

While we do not want to join issues with our sister State, we however wish to state the facts for record purposes.

Negotiation for the said aircraft (DASH 8 Propeller aircraft), which was bought on purely commercial reasons, was concluded in 2009 with an agreement signed for the purchase at $6m (N900, 000,000) and not $9m (N1.3 billion) as said in the report.

Before the signing of the Agreement, Cross River State Government, engaged the services of an Aviation Consultant, who inspected the aircraft and stated that beyond the fact that the interior needed to be reconfigured from its VIP configuration to a 32 seater commercial configuration, the aircraft was in very good state and the actual value as at then would be between $8m - $12m. If we take into consideration the fact that the aircraft was initially bought by Rivers State for over $15m, then the $6m was bargain buy.

The main reason for Cross River State acquiring the aircraft was to ease access to the Obudu Maintain Resort, a N20 billion investment in the Northern Senatorial District of the State which is experiencing below average patronage due to the difficulty in access and unavailability of scheduled flights to the resort.

The aircraft, operated by a commercial airline, will charge commercial rates, and operate scheduled flights to Bebi Airstrip. The essence is to drive traffic to the area so that activities at the resort can pick up and the people can also derive direct economic benefit.

The two parties had agreed on installmental payment, spread over 2 years, but till date, payments made by Cross River State Government total to about N256m only. This is because the week after negotiations were completed, Cross River State suffered dwindling revenue with the loss of oil wells to Akwa Ibom State.

The Government of Cross River State led by Senator Liyel Imoke is a responsible and responsive government which would never engage in frivolous expenditure.

The administration is known for its prudent management of resources, which accounts for the massive developmental strides achieved across the State, despite lean resources. The administration has been acclaimed and acknowledged as such by many, including International Development Partners.

Remarkable efforts have been made by the administration towards bringing the Obudu Resort back to life. Efforts that are yielding fruits with recent visits to the Resort by the President, Dr. Goodluck Ebele Jonathan, the just concluded 1st Lady’s Retreat for Wives of Governors and the recent visit of the Sierra Leonean President and other reputable organizations.

The Resort is fast becoming the premium tourist destination for conferences, Retreats and even vacations/holidays.”