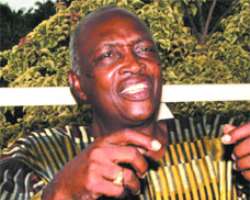 ALAOWEI Broderick Bozimo is the former Minister of Police Affairs and a chieftain of the Peoples Democratic Party, PDP, in Delta State. In this interview with Vanguard, he canvasses support for the proposed six year single term for the president and Governors arguing that it would reduce excessive spending and tension associated with elections, even as he expresses concern on the security situation in some parts of the North arising from the ravages of the Boko Haram sect and  stresses the need for the security network to be strengthened.

Excerpts:
What is your take on the proposed six year single tenure for the President and Governors?

If the President believes that having regard to the good will the people of this nation have given to him, having regard to his assessment that he wants a transformation in government and one of the ways to do it is to look at the structure of government, tenure and the rest of it, I think that we should go along with the bill. Of course people speculate that perhaps it is self serving. I don't think so because I have seen government's reaction to it, where they explained that the amendment of the constitution is never retroactive, therefore since it is being amended to serve the future then it will not be of any benefit to the current office holders.

I think that it is a sensible move, do you know the amount of money the nation spends conducting elections every four years? You notice the kind of violence that flows from elections, incumbency factor. I know that there are advantages of having a four year tenure because the incumbent knows that if he did not perform the first four years he may not be voted back.

But when you look at the other side of the coin, the stability that will afford the nation, the President goes in there and he knows that he has six years and he plans seriously for that period. Another man comes and takes over from there, there will be continuity and development will come. I think the issue is that a man in government should be relaxed and not thinking about the next election which comes up in four years. It is this disjointed nature of our economic development that is causing this kind of confusion we have. I think the move is a good thing for the nation.

As a former Minister of Police Affairs what is your assesment of government's response to the activities of the Boko Haran sect?

Borno shares borders with  Niger, Chad and Cameroon and even when I was minister of Police Affairs between 2003 and 2007, there was cross border criminality in that axis. So this kind of criminality is not new in the sense that cross border crimes committed by these people in these areas. Remember the Maitasene riots, they actually came from across and challenged the constituted authority of the state and they actually burnt down several police stations. I had to go there and I saw things myself. Historically you will find out that this kind of thing has been prevalent in that area.

Boko Haram activities are alien to what we used to understand that was prevalent in Borno state and its surrounding states. I believe that the police, if well equipped can handle the situation because they did it before. You know crime is dynamic and the logistics for fighting crime ten years ago cannot be the same now. Luckily the police in our time introduced the concept of community policing.

This is not really the time for going there to be shooting it out with Boko Haram without adequate appreciation of the situation, intelligence driven understanding of the problem on ground. I believe very strongly that what the authorities should try to do, is not to set up committees and all of that, they should strengthen the intelligence gathering capacity, not only of the police but of all the forces, Army Navy, Airforce. They should approach it holistically in the sense of intelligence gathering. You have to coordinate intelligence properly so that people are focused.

This is why the idea of community policing can be very useful so that if you understand the concept properly, and you understand the root and the actors, you are able to device a method of approach. Let me also say that when I say intelligence gathering, the machinery is already there.

The police have been on ground and they know the history of this criminality in that area. The records are there. Therefore, I don't believe that we should try to strategize with new ideas. We have to encourage the policemen, encourage the arm forces to go and do a good underground work to unearth the perpetrators. Invariably, one is forced to draw comparison between the activities of militants in the Niger Delta and what is happening there.

It is being said that general amnesty should be granted to them. Well I don't know the problem but I believe the presidency knows the problem better than us because they have the intelligence report. But I think that we should leave the options open.

Let us not foreclose any of the options because it will not help the situation. We need to identify the cause, identify the actors.

Our Police is now acknowledged to do a better job when they go out for UN missions. Why?

Yes it is generally recognized that when our policemen are serving with the UN of the African forces, they do better.

I think it is a question of logistics. I know that when our policemen go out, they are properly equipped and organized, but as you know, our funding of the police is still not the best.