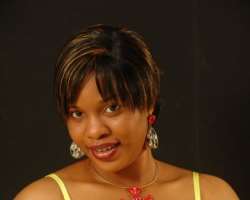 Mosun Filani is one of the prettiest damsels in the Yoruba movie sector who makes the genre tick. She is subtle, sultry, and very attractive.

She looks vulnerable but her articulate disposition coupled with her beautiful face and a figure that turn heads are some of the assets that has made her one of the most sought after actresses at the moment.

But don't be deceived by her susceptible looks because she has told many that she has what it takes to last in the industry.

After her secondary school education in the ancient city of Ibadan, Mosun secured an admission into the Federal College of Education, Osiele, Ogun State. It was while there that she joined the popular Waheed Ijaduade Theatre Group from where she learnt the ropes in the make belief trade and turned out an excellent product.

Waheed Ijaduade, who is a strong force in the Abeokuta movie industry as an actor, movie producer and also director of note, knew that he had a huge talent in his hands and encouraged her to get to the peak of her career.

It was while with Ijaduade's group that Mosun was alleged to strike up an affair with the then up and coming actor,Odunlade Adekola who is now a star actor and one of the fastest growing in the sector, who is also based in Abeokuta.

Those in the know say that the relationship was so strong that no one believed they could ever separate.

According to those who were close to her, that relationship also helped to catapult the unknown Mosun to prominence because she used to accompany Odunlade to almost every movie location and the popularity of Odun,as Odunlade is fondly referred to, amongst the producers and actors, coupled with her boss' strong force in the industry, she began to get roles in movies produced by Abeokuta based producers.

We also learnt that as soon as she began to get popular as a result of the increasing jobs she was getting, Mosun quickly changed base to pitch her tent with star actor, Muyiwa Ademola after meeting him on a movie set where they acted together.

A relationship was said to have kicked started between the two and Muyiwa Authentic, as he is fondly called, became her center of existence.
It was gathered that when the news of her relationship with Muyiwa hit town, it was not only Odun that was disappointed but also other producers who are Odun's friends and many of them were said to have vowed not to give her roles again.

And within a short while, we gathered that her face faded out and became scarce in movies done by the Abeokuta producers. But what she lost in Abeokuta, she was said to gain even more in the Ibadan axis courtesy of Muyiwa Ademola as he was said to have secured roles for her in movies shot by his numerous producer friends and those he coordinated.

So busy was Mosun in Ibadan that she had to relocate from her Abeokuta base to Ibadan to be able to concentrate on her work.

We also learnt that when the news hit town that Mosun had relocated to Ibadan so as to be close to Muyiwa Ademola, she was quick to react by telling anyone who cared to listen that she actually went to Abeokuta for her study and along the line, found herself in acting and since her family were based in Ibadan where she incidentally had her early education and grew up, she had to go back to place she calls home.

Meanwhile, while her relationship with Authentic was hot, Mosun always played the lead roles in Muyiwa's movies and those he coordinated. Such was his influence in her career that he started making enemies with his friends.

We gathered that he once had a run in with his long standing friend Adebayo Tijani, the producer of “Apesin” who reportedly had a fight with Muyiwa over his imposition of Mosun over other babes in their group since she was getting all the lead and juicy roles.

Meanwhile, Muyiwa Ademola is a married man and one way or the other, his relationship with Mosun Filani was said to have gotten to the wife and according to insiders, she once went to warn Mosun to steer clear of her husband and when it seemed Mosun was unrelenting, Muyiwa's wife was said to have sent emissaries to Mosun whom we gathered warned her to desist from her affair with Muyiwa or she would live to regret her actions.

When Mosun saw that that the threat was taking the shape of reality, she relocated back to Abeokuta where she had initially abandoned and settled down to her rental business.

Meanwhile, according to those in the know, Mosun who has dated quite a number of people in and out of the industry is not happy about the development as she was said to have greatly cherished her love affair with Muyiwa more than what she has had with any other person.

The reason, we learnt, is because during her liaison with Muyiwa, she gained a lot of confidence in the industry through the constant use of her face on movie posters and jackets courtesy of the man called Authentic.

Mosun has featured in many movies with Amin Ayo bringing her to limelight just as her role as Tracy in jenifa,a movie produced by Funke Akindele also made her very well known.

Other movies she has featured in include Apesin, Iranse Aje, amongst others.

She has also produced some movies like Alaamu, Iran Kefa and Iku Ewa.