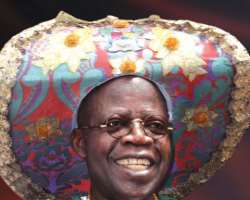 According to the producers, the film is motivated by the pivotal role played by the wife of the former governor of the state, Senator Bola Ahmed Tinubu, in the establishment of "The Spelling Bee Competition."

Over the years, "The Spelling Bee Competition," organized annually for public school students in the state has helped to showcase their innate talents and help inculcate in them the good culture of healthy rivalry for better academic performance.

Spokesman of Total Films, Mr. Tunde Olaosebikan, told Saturday Arts, the event is being packaged to celebrate the achievement of the former first lady through her New Era Foundation in the area organizing events that contributed positively to the education of the youths.

The film Gomina Ojo Kan, which is an adaptation of the Spelling Bee competition, is a well-scripted story that infuses the brilliant performance of a jobless graduate in the popular television programme "Who Wants To Be a Millionaire" and the stalemate that nearly marred the emergence of a one-day governor due to the brilliant display of three whiz kids in the movie's Spelling Bee competition.

Gomina Ojo Kan is an educative, entertaining and informative movie meant to draw more attention to the Spelling Bee Competition organized annually by the Lagos State Government for pupils in public secondary schools; in the state