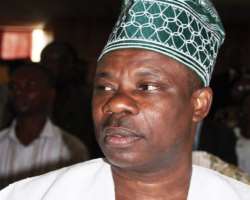 ABEOKUTA, July 26, (THEWILL) – The Ogun State Government has accused Bi-Courtney Nigeria Limited, the company responsible for the rehabilitation of the Lagos-Ibadan Highway of spreading falsehood over a report it said was circulated by the construction company alleging Ogun State Governor, Senator Ibikunle Amosun led policemen to stop its work on the installation of an asphalt plant.

A statement by the Honourable Commissioner for Information and Strategy, Mr. Yusuph Olaniyonu accused Bi-Courtney Limited of abandoning the road project.

The statement said, “The story circulated today by Bi-Courtney Nigeria Limited over the parcel of land formerly occupied by RCC Construction Company along the Sagamu exchange is nothing but total falsehood being peddled by a company which ordinarily should be offering apologies to Nigerians on why over two years after it signed agreement with the Federal Government on the rehabilitation of the strategic Lagos-Ibadan Expressway, it has done virtually nothing.

“The company had alleged that the Ogun State governor, Senator Ibikunle Amosun led policemen to stop its work on the installation of a so-called $6.5 million asphalt plant. The fact of what happened was that on Saturday, 23 July, 2011, Arc. Lekan Adegbite, the commissioner for works and infrastructure had sent some construction workers to the disused site of the RCC to commence work on its conversion to a trailer park for the purpose of easing traffic congestion on the Lagos-Ibadan Expressway. On getting to the site, policemen acting at the behest of the company stormed the site to dislodge the construction workers. In order to protect themselves from harm’s way, the workers reported the matter to the nearest police station.

“It is pertinent to note that as at the time the construction workers arrived to begin Earthworks, all they met on site were three 40 ft containers and an abandoned shed formerly used by RCC. We wonder if all these can be taken to be the so-called $6.5 million asphalt plant the company claimed to have installed.

“On arrival at the site, the commissioner for works had stated his mission to one Mr. Stephen who claimed to be the assistant the engineering team. The commissioner then asked him to inform his superiors that if they have any claim to the said land, they should report to the Governor’s office on Monday with all their relevant documents. Up till now, there has not been any response.

“For the records we would like to state that there was no asphalt plant on site and that His Excellency Senator Ibikunle Amosun was nowhere near the site as claimed by Bi-Courtney and as such could not have led a detachment of Policemen to the site.

As earlier stated Bi –Courtney is embarking on this smear campaign to distract attention for the company’s inability to deliver on the palliative works on the Lagos Ibadan Expressway. With the ultimatum given by the Federal government, the company is now looking for excuses for its non-performance.

“We like to restate that the parcel of land in question is situated within 2km global acquisition along the Lagos-Ibadan Expressway as allowed by law. It is also already under government acquisition and therefore its being designated as a trailer park is in public interest.

“We maintain that though the company on April 20, 2011 applied for the use of the land there is no record that the company had either furnished consideration as required nor fulfilled other pre-conditions necessary for it to take full possession.

“By law therefore, title cannot pass if there is failure of consideration.

“The fact that the state requires the land for its trailer park project is an overriding public purpose which weighs higher than any other form of interest. We challenge Bi-Courteny to present any document which gives it a valid claim to the land.

“Whipping up sentiment to cover-up its inadequacies and unwillingness to follow due process will not cover up the truth.

“Once again, the government wishes to assure all citizens and residents in the state that it will continue to act in the overall general interest, take decisions that will improve on the their general well-being and continue to deliver on its electoral promises.”