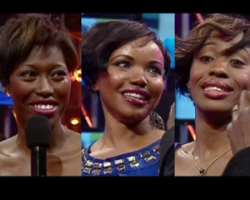 Three Housemates were booted out of the game in dramatic fashion tonight during the emotionally-charged Live Eviction Show, leaving seven Housemates with a real chance of getting the top spot!

After a long, stressful week of speculation and stress, Millicent,Kim and Vimbai were given their marching orders, missing out on a chance to be in the Amplified Finals by the skin of their teeth. Vina breathed deep in a bid to control herself, but subsequently burst into tears before announcing her 'Save and Replace'. When she finally worked up the courage to tell her fellow Housemates - who had assembled in the lounge - that she had saved Karen and put Lomwe up instead, the latter sat back for a moment and let it sink in, before hurrying upstairs to get his bags - leaving Vina sobbing in the lounge. After consoling Vina, Vimbai held back tears and put on a brave face when she was Evicted from the Big Brother House.

She and Wendall shared one final hug before he whispered something inaudible in her ear. "See you after the finals," perhaps?

Vimbai couldn't help but breakdown and cry onstage when she watched her highlights from the House.

She walked off stage after her interview bawling with her hands covering her face. Big Brother Africa's 'Chief Crier' Kim's Eviction was less teary - with the Zambian lass insisting her fellow Housemates don't spoil her snazzy hairstyle. It's no surprise that there were no tears though because she swore she would not cry if Evicted. She and Lomwe shared one final clinch in the garden before she disappeared behind the big Eviction doors. Millicent was given her marching orders, but seemed to have an awesome time flirting with her fans on stage.

Africa! This is it! Top Seven is made up of Vina, Karen, Sharon O, Wendall, Hanni, Luclay and Lomwe!