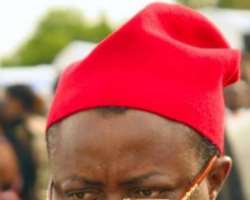 Last year,veteran film maker and the chairman of AGN Board of Trustees,Ifeanyi Dike fell terribly ill and was diagnosed with kidney damage and needed a transplant.

Reports and motions flew around the country for government and individuals to support as the film maker does not have such money needed to be flown out of the country for treatment.

Few months into this campaign, we gathered that Lagos State Government generously contributed the sum of N5 million to enable him travel to Indian and commence the treatment.

Few months after, we also learnt that the federal government equally supported the healing process of Ifeanyi with another N5 million.

This was applauded by all the well wishers and fans of the industry, as the life of this popular man was saved by the government.However,the rumor brewing in the industry concerning these generous contributions from the government is not heart-warming at all.

This is because inside sources informed us that few members of AGN Board of Trustees and other executive members of the Actors' Guild of Nigeria, AGN collected this fund from the government and refused to give the complete sum of money to Ifeanyi Dike's family to cater for all the expenses.

We were reliably informed that the better part of that money was shared among the trusted members of BOT, while N2.4 million was given to his family to take care of all the expenses.

As a result of this situation,Ifeanyi Dike's family was said to have gotten money from other individuals to pay his hospital bill, traveling expenses and further treatment.