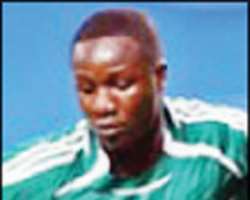 However, the player, who was once sought after by English giants Arsenal, will spend next season on loan at Segunda Liga side Cardiz FC.

'I will be on loan at Cardiz for one year before I return to Granada,' the former Golden Eaglets forward said on Monday.

'I hope to play regularly at Cardiz and make a name for myself there before returning to Granada. Hopefully, Granada will still be in La Liga when I go back.'

Akinsola first came to limelight in 2007, when he scored the winning goal as the Eaglets defeated hosts Togo to lift the African U-17 Championship in Lome before also helping the squad to the world title few months later in Korea.

Although a key member of the 2007 Eaglets as he caused problems for opposing wing-backs, Akinsola failed to make the grades at the U-20 and U-23 levels for Nigeria like his other teammates Lukman Haruna, Kingsley Udoh, Dele Ajiboye and others.

But the player is optimistic that his big move to Granada will bring forth better fortunes with the national U-23 side.