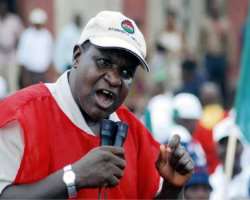 NLC President, Alhaji Abduwahid Omar
OLUSOLA FABIYI reviews negotiations over the N18,000 minimum wage and concludes that the dispute over the wage is far from being resolved

The message from the organised labour was apt: 'Nigerians should stuff their households with enough foodstuffs that could last them at least three days.' This, according to them, was because the three-day warning strike would be total. But the timely intervention of the 36 state governors under the aegis of the Nigeria Governors' Forum and the Federal Government saved the situation. Thus, after 10 hours of intensive lobbying and horse-trading, the workers decided to call off the planned strike, which would have taken place between Wednesday and Friday last week. But before the workers agreed to call off the strike, their representatives were adamant that it would go on unless the governors agreed to their terms.

This made the Rivers State Lodge, Asokoro, Abuja venue of the parley which the governors attended tensed. For over seven hours, the labour leaders, who were represented by the President of the Nigeria Labour Congress, Mr. Abdulwaheed Omar; his deputy, Mr. Isa Aremu, and the President of the Trade Union Congress, Mr. Peter Esele, refused to shift ground on their demand that the payment of the N18,000.00 minimum wage was not negotiable. The governors, on the other hand, also said the resources available to them would not enable them to do so. While the labour insisted that all categories of workers irrespective of their levels should enjoy the minimum wage and the arrears, the governors were able to convince them (the labour leaders) that doing so would make some of the states go into comatose. When this piece of information slipped to our correspondent, the acting General Secretary of the NLC, Mr. Owei Lakemfa, had denied it, saying 'there was no such agreement. All workers will get the arrears irrespective of their levels.'

With this agreement, both labour and the states had shut out senior state workers from benefitting from the arrears.

In reality, the outcome of the meeting between the governors and the workers showed that both parties were not rigid in their demands. According to the agreement, while the 36 states of the federation agreed to comply with the new National Minimum Wage (Amendment) Act, 2011, the labour on the hand agree to have another round of negotiations with the government on its implementation 'not later than July 13, 2011.'

Also, the agreement further showed that states may pay different salaries to their workers based on resources accessible to them. The agreement said in part, 'Detailed negotiations on salary across board will be done with a view to effecting payments by August 2011, while modalities for payment of the minimum wage will be worked out according to the peculiarities of each state. The 36 states agree that the effective date for the implementation of the view minimum wage shall not be later than August 1, 2011 provided that any worker who earned less than N18, 000.00 between 1 April and the effective date of the implementation of the new minimum wage shall be paid arrears of the difference. The time frame for the payment of the arrears of the difference of the new minimum wage effective April 1, 2011 shall not be later than October, 2011.'

Unknown to many Nigerians, the agreement to shelve the strike was already reached with the governors, but the labour leaders felt that the Federal Government might be hesitant to go into negotiations with them if the news should be released before their scheduled meeting. Sources at the labour/governors meeting further revealed that the NLC Deputy President, Mr. Isa Aremu, mounted pressure on other labour leaders not to sign the agreement, saying if they did, they would be impeached by the workers. Even when the governors told them that they would keep the agreement secret, the labour leaders chose to listen to Aremu and therefore refused to sign the agreement. The last paragraph in the unsigned agreement read, 'In the face of the commitment by the governors, labour resolves to suspend the three-day warning strike called for this week in the states.' But they however returned after their fruitful meeting with the Federal Government team.

At the office of the Secretary to the Government of the Federation, Senator Pius Anyim, the labour leaders had told the government delegation that the decision of the central government not to pay the money this year was unacceptable. The Federal Government had on Monday said it would only pay a certain category of workers for a start and commence the full implementation of the new wage regime next year. They hinged their decision on the fact that since President Goodluck Jonathan had signed the bill, it had become law. Conversely, under the agreement reached on July 19, workers of all cadres in the public service will benefit from the expected upward review of salaries that will follow the implementation.

Like their agreement with the governors, the labour leaders also agreed that negotiations with the Federal Government shall be concluded on the implementation of the minimum wage not later than July 31, 2011.

But feelers from the states revealed that the aborted strike might be a temporary relief as indications have shown that most of the states may not be able to pay the new wage. For example, the governor of Ondo State has said the payment of the wage will leave him with no option other than to retrench some workers and deduct appropriate taxes from those that will survive the purge. He explained at a stakeholders' forum last week in Akure that he would be left with about N200m to spend on capital projects out of the N4.3bn monthly revenue available to the state. Our correspondent learnt that the 58,000 workers in the state would earn N4.1bn monthly as salaries if the state decided to pay the new wage. The governor had told the workers that he might be forced to lay off some of them and deduct the appropriate taxes as approved by law, from their salaries if the new wage must be paid.

Also, in Plateau State, the Attorney-General and Commissioner for Justice, Mr. Edward Pwajok, said the government would not take a definite stand until a staff audit it ordered was completed. He said the picture was not yet clear about what measures or options the state government would take. 'No agreement has been reached with the workers yet. What I know is that the government has set up a committee to review the wages of civil servants in the state and until the report of that committee is submitted, the government cannot make a categorical statement on the issue of the minimum wage. Of course, you know that state governments are calling for a review of the revenue allocation formula. The position will become clearer in a matter of days, I can assure you on that,' he said.

But the state chapter of the NLC Congress said that the agreement did not contain retrenchment.

In Kaduna, it was gathered from the Sir Kashim Ibrahim Government House that the state government was seriously considering scaling down its 94,000 workforce to meet up with the implementation of the new wage. It was learnt that the state government's monthly allocation of a little over N3bn from the federation account and the over N500m it gets monthly through its internally-generated revenue fell far short of the resources needed to pay the workers. The state's Head of Service, Mrs. Hannatu Ugah, said that the government's wage bill for its 94,000 workforce stood at N2.4bn monthly. Ugah said that the state civil service employed 34,000 workers with a monthly wage bill of N1.4bn, while its 40,000 school teachers earned N800m monthly. She said that the 20,000 staff of the 23 local government councils of the state were paid N200m monthly. On the payment of the N18,000 minimum wage, the head of service said, 'The government is awaiting guidelines for the implementation of the N18,000 minimum wage.' Asked if the state government was considering reducing its workforce to enable it to pay the minimum wage, she said the government was looking at the various issues at stake.

States such Ekiti, Oyo, Edo, Anambra and Ogun have said that the only option if the new minimum wage must be paid is to embark on an aggressive increase in the states' internally-generated revenue. They have thus vowed that those who are not paying or under-paying taxes will have to be ready to adjust in order for the states to be able to pay the money. However, most workers are opposed to increased payment of tax; an action that will set them against their state governments. Whichever actions the governors take, it is evidently clear that the suspended strike could be revisited, especially in some states, which may in turn get the sympathy of their counterparts at the federal level. Therefore, the strike may not be over, says Emmanuel Fagbamila, a political scientist. But while the states mull option available to them in order to meet the workers' demand and also not derail on their electoral promise, the Labour Party has asked states that cannot pay the minimum wage to merge. The party also said it was worried over the inability of the governments to achieve an understanding with the organised labour to put to rest the issue of minimum wage, which had been passed into law.

The party's national chairman, Chief Dan Nwanyanwu, said it was not enough for state governors to say that they would pay, adding that there must be concrete arrangement as to when they would commence the payment. The party even incited the workers against the governors by saying they must get concrete evidence from government before agreeing not to go on strike, adding that 'governments at both the states and centre are known for their double-speech and not matching their words with action, therefore the workers cannot be blamed for not trusting the government, having fooled them severally.'