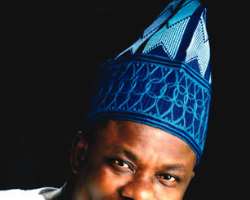 It does not look like a cordial relationship between the Action Congress of Nigeria and its government in Ogun State. The party, which is supposed to be savouring its victory at the last elections, is gradually tottering on a looming crisis between it and the state government. But the party and the government pretend that all is well. Indeed the peace that appears to exist between the party and the government can be said to be mere cosmetic and one does not need a prophet of doom to predict that within a short time, except the present situation is reversed, the bubble may burst.

The genesis of the looming crisis is traceable to some developments before the last general elections. During the campaigns, there were reports of Amosun's plan to dump the ACN and contest on the platform of another political party. Amosun later denied the reports.

Our correspondents learnt that the governor, who defected from the All Nigerian Peoples Party, wanted some of his loyalists who left the ANPP to be considered for positions in the national and state assembly. In the indirect primaries conducted by the party, Amosun also wanted to have a say in the choice of his deputy, but the party resisted and had its way as it maintained that the governor having his loyalists at the state assembly was not good enough for internal democracy.

Amosun appeared uncomfortable with the ACN's position but the party had its way. Today, the table seemed to have turned.

Since the declaration of results of the elections and eventual inauguration of Amosun as the governor, the party has been at the receiving end. The first indication of this development came when the leadership of the party met and came up with suggestions on the appointment of commissioners. The party in its recommendations to the governor noted that to ensure geographical distribution, equity, fairness and justice in all parts of the state, the local government areas where the governor, his deputy and the speaker of the state assembly come from, should not produce commissioners. Several efforts made by the party leadership to get their recommendations discussed and passed to the governor were rebuffed as investigations revealed that Amosun was aggrieved that the ACN never contacted him before holding such a meeting.

The Speaker was the only candidate of the party that was spared as he is the only person from Yewa in view of the outcry over marginalisation of the area. For the Deputy Speaker seat for an example, the party's choice was Mrs. Khadijat Oladapo-Adeleye, a member of the G15, a group believed to be against the past governor, Otunba Gbenga Daniel, during the face-off of the ex-governor with members of the state assembly.

She contested against Tola Banjo representing Ijebu Ode constituency and lost, polling 10 votes against 15 votes got by Banjo. This development created a crack within the members of the state assembly.

The party never had a single input in the appointment of commissioners. The governor, however, out of the three senatorial districts that made up the state, picked Ogun East Senatorial District Chairman of the party, Mr. Falilu Sabitu, and his counterpart from Ogun West Senatorial District, Mr. Daniel Adejobi, as commissioners. The governor's action has been seen in some quarters as an attempt to control the party's machinery in the state.

The geographical distribution of the nominees is also said not to favour the party and the people and while some of the 20 local government areas that make up the state are having two or more, several others do not have representations.

At the inauguration of the commissioners, the leader of the party, Chief Olusegun Osoba, and the state deputy governor, Prince Segun Adesegun, were absent. Osoba was said to have travelled out of the country.

One of the ACN members and keen watchers of events in the party, Mr. Rahmon Oyegbenro, in an interview with our correspondent, lamented that the governor had not been fair to the party since assumption of office.

'The leadership of the party before Amosun's defection to the ACN has been neglected and the party itself abandoned. The ACN as a political party has always been trying to avoid the situation in the PDP, where the party's leadership is submerged under the government. But this is the situation that we are about finding ourselves in the ACN in Ogun State today. This however, not surprising, going by Amosun's background, coming from PDP,' he said.

On why the party is witnessing crisis shortly after the elections, Oyegbenro added, 'It is not surprising since we are coming from a position of weakness. It is easy for the government that controls resources to manipulate the people.'

He regretted that while the leadership of the party was folding its arms, its members and supporters were disenchanted.

'In all the appointments made so far since assumption of office, there was none where the party was carried along. When Aregbesola came on board in Osun State, the chairman of the party was appointed as secretary to the state government. You can find other instances in other ACN controlled states. Such appointments enhance cohesion between the party and the government. Even in Lagos , Fashola carries the party along in governance and this is reflected in the appointments. President Goodluck Jonathan recently gave a ministerial appointment to the National chairman of the PDP. Many of such instances abound in other places. We wonder why that of our state should be different,' Oyegbenro lamented.

He stated that the leadership of the party believed that after working hard to attain victory, it would not be wise to start 'an in-house -fighting' that would distract the government.

The displeasure of the party's leaders with Amosun's appointments was openly confirmed at the screening of commissioner-nominees at the assembly when a lawmaker, Oladapo-Adeleye, faulted the distribution and nomination of the appointees by the governor.

Oladapo-Adeleye, a two-term member representing Ifo II State Constituency, said the selection of the commissioners was lopsided, violated the principle of federal character and that certain nominees were not sponsored by the party as stipulated by the nation's Constitution.

Efforts made by our correspondent to speak with the Director of Publicity of the ACN, Mr. Sola Lawal, on the happenings between the government and the party proved abortive.

However, Amosun, during the inauguration of his commissioners, reacted to some of the grievances of the party. According to him, the decadence in the state caused the need for a combination of professionals and politicians. The governor promised that the party would soon start witnessing the appointment of its members into political positions.

He said the state was endowed with so many knowledgeable and credible men that appointing people into positions could be a difficult task.

Amosun described himself as a core party loyalist and expressed his commitment and loyalty to the party. He described the ACN as the only progressive party in the country and promised to always work in ensuring that the party was stronger in the state. He urged the leaders not to see the non-appointment of ACN members as an attempt to spite the party, adding that said the situation of the state required his appointments to be made beyond the ACN fold.

'To our party's men and women, if you observe that you have not been seeing politicians or people you know in government, I can assure you that this will soon be addressed as from next week, you will start seeing some of the known faces with us,' Amosun said.

Investigations by our correspondent revealed that the governor had asked the party to nominate 10 special assistants, two special advisers and two consultants for appointments.

However, events in the coming days will reveal the level to which the fulfilment of promises made by the governor can go in pacifying aggrieved members of the party and fostering unity among them.