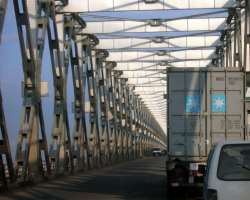 THE NIGER BRIDGE.
Listen to article

"I have never seen anything remotely like this before," –Lt. Amelia Huffman, Minneapolis Police Dept.

"There was a very eerie silence right after the collapse. It was 5 to 10 minutes before I heard any sirens…" –Joe Costello

"I got out of my car and the first thing I heard was [were] the kids screaming on the bus. I called 911. I didn't really know what else I could do." –Flip Saunders

These were some of the sentiments and anguish expressed by the eyewitnesses to the rush hour catastrophic collapse of an eight-lane steel truss arch I-35W Mississippi River Bridge in Minneapolis, Minnesota on August 1, 2007. I remember vividly that day and the ensuing wall to wall coverage of the accident by the television networks. With advanced and efficient first responders in America, many families still were devastated and the nation sympathized and remembered them in its thoughts. Indeed, it was a sad day in the US, particularly in Minnesota.

Sadly, the anguish could be quadrupled in the event that Niger Bridge collapses—an inevitable collapse that would reverberate around the country; the predictable crumple is just a matter of time. Obviously, the calamity would result in scores of luxurious buses and other numerous vehicles with their passengers being plunged into River Niger—an avoidable reality. Indeed, there is a technical report currently sitting with the Presidency warning that the present Niger Bridge will collapse any moment from now. This is alarming!

In fact, the associated human and economic costs of the predictable, but avoidable calamity of the Niger Bridge are enormous. Let me reiterate, undoubtedly, the human and economic consequences resulting from Niger Bridge collapse would be gargantuan—loss of lives and livelihood—creating colossal human and financial burdens on families in the Southeast in particular. About thousands of people would lose their lives or be maimed for life leaving an indelible scare on their body, mind, and soul; transportation industry in the affected areas would grind to a halt, as well as loss of properties; goods and services. Also, the financial institutions and insurance industry would be gravely impacted resulting to uncontrollable inflation, and general economic disruption and dislocation of the affected regions that would cause massive economic deterioration. The collapse would compound the utility loss and costs associated with public reaction and replacement, which may linger for generations.

Let us not forget that Niger Bridge is the only link by road between Southeast and Delta, Old Midwest, and Old West. That link will be broken causing enormous economic disruption and dislocation for the entire South, particularly the entire Old Eastern Region. Therefore, a mere possibility of the collapse of the Niger Bridge should be a heightened concern to everyone, particularly the federal government.

It should be the policy of the federal government to maintain and rebuild Nigeria’s infrastructure for continuous economic and human development. It is a sound domestic policy the policymakers and economic advisers should honestly embrace. The collapse of Niger Bridge will lead to the economic strangulation of the Southeast thereby affecting industry and commerce in Nigeria, among other sectors, with unmitigated lurk behind severe unemployment and inflation. As a result, many past administrations have promised to build the second Niger Bridge. To build a lasting legacy, President Jonathan’s first 100 days in office should witness the actual signing of the contract to build the second Niger Bridge.

Mr. President, please commence work immediately on the second Niger Bridge. Do not allow this inevitable catastrophe happen on the current Niger Bridge. Don’t let it happen under your watch! The people desperately need your leadership on this matter. Please mobilize the National Assembly, Minister/Ministry of Works, Minister/Ministry of Transportation, and critical principals to action. The country has reached a critical mass and the second Niger Bridge should be built without any further delay. Many past administrations made a promise to build a second Niger Bridge and dredge Niger River, but they failed the people. Please Mr. President, rise to this occasion and act without equivocation. Again, it is the moral obligation of the federal government to rebuild and maintain its infrastructure for economic viability, as well as economic growth of the nation. Perhaps, the buoyant economic benefits of the construction of the second Niger Bridge may spur a necessary action on this critical and life-saving project.

In any case, I dread the inevitable; the grim outlook of loss of human lives churns my stomach. I speculate that thousands of people, including babies and women would lose their precious lives in the event that Niger Bridge caves in. The despair that would accompany such loss of lives, including physical injuries, would be written indelibly on the faces of Nigerians, particularly on the soul of people from the Southeast. It will be a sad day for the nation. Perhaps the sadness should be deep enough to emerge a rallying cause for Nigerians. I feel strongly about the second Niger Bridge just like many other Nigerians. This prompted me to contact Gov. Ikedi Ohakim recently who shared the same sentiments. In our conversation, speaking in a soft, but confident voice, Dr. Ikedi Ohakim assured me that he would take the matter to President Goodluck Jonathan. Ohakim further reiterated—with humility—that infrastructural development is critical to a nation’s economic growth. “Niger Bridge is the busiest link between the Southeast and Delta, Edo, and old western region with enormous economic impact,” he opined. “I am assuring you, including Nigerians in the Diaspora and home that I will take the second Niger Bridge matter to the presidency and I believe he will listen,” Ohakim concluded.