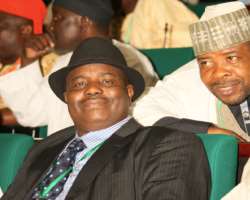 ABUJA, July 20, (THEWILL) - Speaker of the House of Representatives, Hon. Aminu Waziri Tambuwal has warned the three tiers of the Government against playing politics with issues concerning taxes and wages of Nigerian workers, stressing that such sensitive issues should not be toiled with again in the overall interest of the country.

This is just as the Deputy Speaker; Hon. Emeka Ihedioha commended the Nigeria Labour Congress [NLC], Trade Union Congress [TUC] and other members of organized labour for suspending the strike action earlier scheduled for Wednesday over non implementation of the National minimum wage for workers.

Tambuwal gave the advice at the beginning of Wednesday’s plenary session while speaking on the suspended three-day nationwide warning strike by the organized labour over the non implementation of the N18, 000 National minimum wage.

He advised that whenever issues concerning the upward review of wages come up in the future the stakeholders should ensure that everything is resolved and all agreements concretised before being made public.

According to him, this has become necessary so as to avoid the unnecessary tension, anxieties and fears that had enveloped the country in the last few days over the non implementation of the National minimum wage, adding that the ugly situation was a lesson for all stakeholders.

He however commended the organized labour, the Federal and States government for reaching an understanding that led to the peaceful resolution of the crisis, just as he commended the Senate for the matured approach it adopted in dealing with the matter when the issue was raised in the upper chamber, believing that there is only one National Assembly.

Earlier, the Deputy Speaker in a motion lauded the Speaker for leading the House to intervene in the proposed industrial action, saying the Speaker has displayed visionary leadership qualities that have made the House proud.

He also commended his colleagues for backing the motion for the House to intervene in the matter, saying their efforts had yielded positive results that all members should be proud of.

Describing labour’s resolve to suspend the proposed strike as patriotic, Ihedioha commended the Federal Government’s team led by the Secretary to the Government of the Federation, Sen. Anyim Pius Anyim and the Minister of Labour and Productivity, Chief Emeka Wogu, the Governors’ Forum led by Governor Rotimi Amaechi and Governor Adams Oshiomhole as well as other stakeholders involved in mediating over the impasse.

Ihedioha also urged all concerned parties to respect agreements mutually entered into in order to avert any industrial unrest that could endanger the fragility of the country’s economy, urging that all hands must be on deck to work towards moving the country forward at all times.

Recall that following the 3-day warning strike threat announced by NLC and its affiliates, the House had adopted a motion last Wednesday mandating its leadership to engage organized labour, the Minister of Labour and Productivity and other relevant agencies of government in a dialogue as part of efforts to avert the strike action.