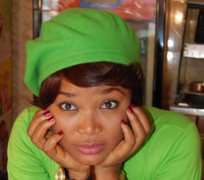 •Tessy
Fair skinned Tessy Oragwam's dream as an actress is to put smiles on people's faces, little wonder she plans to own a school for the deaf and dumb. This Nollywood upcoming actress is in a joyous mood because she has been nominated for Best New Actress of the year an award by City People Magazine.

Determined to succeed with all the challenges life has thrown her way, Tessy is not ready to pay any price to get to the peak of her career. She believes that hard work pays even if acting is not financially rewarding as expected.

In a recent chat with Daily Sun, Tessy bluntly states that she won't stay in an abusive relationship no matter what is involved. She also spoke of other issues. Excerpts:

When you started acting, what dreams did you have about your career?

When I started acting, I had dreams of putting smiles on people's faces and also aimed at getting to the peak of my acting career.

You have been nominated for City People Awards as Best New Actress of the year, how does that make you feel?

I am really very happy. It feels good to know that I am recognized.

What do you do differently from your contemporaries?

Nothing, I just be myself and that's it. It is very important to carve your own niche in the industry. It stands you out.

How would you assess Nollywood?
Nollywood is getting better by the day but we still need Government's support for things to really work out well.

How did your journey into Nollywood begin?
I started having passion for acting after my secondary school. I then decided to make it a career by obtaining a diploma in Theater Arts. It just happened. That's how I kicked off in the industry.

Were there times you felt you couldn't cope with the challenges of being an actress?

Not at all. Life is not a bed of roses. You have to be determined to succeed no matter what.

Where are you based presently?
I am based in Lagos. It is the center of entertainment.

What do you feel is responsible for the non availablility of Igbo movies in Nigeria?

What has been your greatest challenge in the industry?

Well there are challenges but non to be specific because they all come with their own different strains and intensity. The best thing is to overcome them and keep moving on.

What do you have to say about homosexuals and lesbians in the industry?

I have nothing to say on that because I dont know of any.

Is it that you don't know or you don't want to talk about it?

It is a sensitive issue and is not one I want to discuss.

Have you had course to act romantic roles?
Yes, I am a professional. I have to act the roles I am given.

What happened to you after that, did you feel like really doing it with the actor involved?

No. It's just a job and not a personal thing. We just act as if it really happened.

A lot of celeb marriages are hitting the rocks, what do you think is responsible for this?

I don't know anything about that because I'm not married yet.

But you hope to get married someday?
Yes. It is just being conscious of what you want and complementing your partner that matters. Marriage is sacred and should be treated as such. It is God's way of allowing to relate with each other like He relates with us.

Who are your role models in the industry?
When you talk of Nollywood, Joke Jacobs and Bukky Ajayi inspire me. In Hollywood, I am inspired by Angelina Jolie and Julia Robert.

What price are you willing to pay to become an A-list actress?

I don't need to pay any price, all I need is to be good in what I'm doing and to be prayerful. It is God that blesses the works of our hands.

How was growing up?
Growing up was good. I had a nice time growing up with my close-knit family.

What kind of upbringing did you have?
I am from a Christian home. My parents were disciplinarians, so we were brought up to be very disciplined and respectful.

Did your family stand behind you when you went into acting?

Initially, it didn't go well but later they accepted it. They have been very supportive ever since.

What is so special about Tessy?
I am fearfully and wonderfully made by God. This mentality stands me out wherever I go. I don't try to be like someone else.

What kind of man would you marry?
A man that will take me for who I am. A loving, caring man who will always be there for me. Above all, he should be a God-fearing man.

Can you stay in an abusive relationship for money and fame?

No, I can't no matter the money involved. It is dehumanizing to stay with a man who doesn't value your personality and your life. A relationship is supposed to be between two people and not between a master and a slave.

What else do you hope to achieve as an actress?
I hope to have a school for the deaf and dumb. Handicapped people face a lot of challenges in our society.

How do you handle annoying male admirers who do not take no for an answer?

I will simply walk out on them politely. That is the ideal thing to do.

Have you had any embarrassing moment as an actress?

No, and I pray it doesn't happen.
Can you tell us about yourself?
I am Tessy Oragwa from a family of six and I am the third child of my family. I grew up in Lagos and I am currently an undergraduate at the University of Lagos, studying Business Administration.