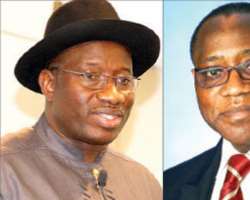 The Federal Government recently announced the creation of the Ministry of Trade and Investment as a cardinal move to revamp its investment drive. In this report by RONKE BADMUS, operators and stakeholders in the real sector weigh the prospects of the new initiative.

The announcement of the new Ministry of Trade and Investment by the Federal Government last week has been described as a deliberate attempt by the administration of President Goodluck Jonathan to steer a new direction towards revamping the economy.

The supervisory minister, Mr. Olusegun Aganga, further raised the stake on Wednesday with the unfolding of a new focus targeting N34tn growth in the economy yearly. Out of this, Aganga said N15tn would be attracted into the economy from outside through restructured investment drive.

Formally unfolding his agenda for the ministry during an interactive meeting with journalists in Lagos on Tuesday, Aganga said the ministry would create a Diaspora Fund for the purpose of attracting funds from investors all over the world. He said the fund, scheduled to take off in September, would be part of strategies aimed at unlocking available capital around the world for investment in critical sectors of the Nigerian economy.

According to him, with the new ministry, the erstwhile Commerce and Industry Ministry has been expanded, refocused and rebranded so that it could play its proper role in driving the nation's economy.

Aganga noted that the ministry would focus on investments, source of funds and create a conducive environment for industrial growth, adding that there was enough capital within and outside the country to drive the required double-digit growth.

He said, 'We have so many Nigerians in the Diaspora. The economies of many countries were built based on investments from people living abroad. We are in the process of structuring a fund, which we hope to put in place sometime in September when all the approvals are in place. That fund will be targeting those in the Diaspora.

'They will come in, bring their money and invest. According to the World Bank, in 2009, about $18.6bn was remitted to this country by Nigerians in the Diaspora. If we take half of that, and channel it the right way into the country, we will have enough capital to invest in this country. That is just focusing only on what you already have.'

As the nation awaits actions from the new ministry, stakeholders in the real sector and other economic experts appear thrilled by the prospects held by the new drive. However, in spite of their eager expectations, they seem at a loss over the key steps to be taken in addressing the lingering problems of the economy.

They have also set an agenda for the ministry on the operational expectations in the sector. According to them, the issue of special incentives or waivers on some products ought to stop, with needed incentives evenly granted to the productive sector of the economy.

According to them, regulation and management of the ministry through attraction of both local and foreign investments will ensure a return of the economy to the boom era of the 1970s.

In a way, the stakeholders agree with government's initiative, saying that the challenges of infrastructure should not be a barrier to the new ministry or its objective of ensuring growth as it may even encompass steps towards providing solutions to power and other infrastructure challenges.

According to the President, Manufacturers Association of Nigeria, Chief Kola Jamodu, the new ministry is good, but it depends on the job content.

Jamodu says since one of the purposes of the ministry is to create more employment in the country, the evolving opportunities should not be enjoyed by foreigners through importation of goods.

He says the economy should strive to make sure that manufacturing in Nigeria improves this time around, adding that foreigners that need jobs should come here to invest. By doing this, citizens will benefit from their investment and there will be opportunities to invest.

He advises the ministry not to grant incentives to a set of people but it should be granted to everybody.

The President, Money Market Association of Nigeria, Mr. Wale Abe, says the decision taken by the government has raised two important issues. In the first instance, he says people are asking that the government should cut down on overheads cost. Therefore, he says setting up another ministry can only raise overheads through additional spending.

On the other hand, according to him, it is not a bad idea to take some steps that will be of benefit to the economy.

'The new Ministry of Trade and Investment is very important to the economy,' he says.

Abe advises the government on the need for proper regulations of the ministry and harmonisation of its fiscal policy so as to attract both local and foreign investors.

According to him, the state of infrastructure in the country does not mean that the government should neglect steps that should be taken to improve the growth of our economy locally and internationally.

He says, 'I believe that is the reason for setting up the new Trade and Investment ministry. Attracting trade and investment is surely the solution to improving the level we are now.'

On the part of an economist, Prof. Afolabi Soyode, a former Vice-Chancellor of Ogun State University, Ago-Iwoye, the idea of having a separate ministry for trade and investment, with the objective of attracting substantial funds for investment and other areas, where the fund can be used, is a welcome idea.

He, however, notes that serious investors would worry about lack of power and inadequate infrastructure though, 'but if there are genuinely good investors, they would think more of long-term benefits and will also think about what the government is trying to achieve, which is solving the problems that are disturbing the growth of the country.'

He explains that from the recent pronouncements by the government, the critical thing is that the government is interested in dealing with the challenges of infrastructure. By doing this, the ministry will thrive.

Soyode says, 'The government funds alone cannot improve all sectors of the economy, it needs support and inflow of private investors from both domestic and foreign, and I think this is what the government is trying to do.'

The National President, Nigeria Association of Small Scale Industrialists, Chief Chuku Wachuku, explains that for the country to move forward, there must be interests from more enterprises, locally and from foreign countries. The concept of the new ministry is a good one, he says.

According to him, a lot of people make mistakes of saying that relying on foreign direct investments makes the economy to prosper. But for an economy to thrive, our local industries, including small and medium-scale entreprises must be encouraged.

'We just cannot wait till all infrastructure, especially power is in place before actions that can develop the economy is taken. With the help of various sectors that are planning to set up independent power plants (for instance, the IPP the manufacturers are planning to set up), the plan will work out well.'

He commends the former minister of finance for making the sacrifice to head the ministry, saying that he has demonstrated his interest in the SMEs.