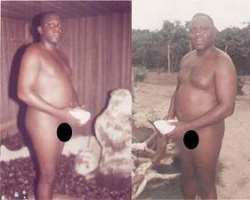 THE crisis in Ogun State involving G 15 members of the House of Assembly was triggered by a blood oath taken at a shrine in Ijebu-Igbo, Ijebu North Local Government, last year, the Nigerian Compass learnt last night.

The members took the oath to ensure a united front against Governor Gbenga Daniel.

The oath, which was taken naked by the members and in daylight, was witnessed by the sponsors and the native doctors, the administrators of the oath. Items used for the oath included blood, cow heads, calabash and other fetish materials.

Each participant swore to upholding opposition to Daniel at all times and submitted to the death of their first born, should they renege on the oath. Each of them was required to mention the name of their first child in the course of the oath, setting in motion serious consequences for the children should their fathers go back on the prescribed course of opposition.

The Nigerian Compass learnt that the finality of this oath is why prominent traditional rulers such as the Awujale of Ijebuland, Oba Sikiru Adetona, the Alake of Egbaland, Oba Adedotun Aremu Gbadebo, the Akarigbo of Remoland, Oba Michael Sonariwo, and other prominent leaders such as Prince Bola Ajibola, General Tunji Olurin and Yeye Oodua H.I.D. Awolowo were unable to persuade them to change their stance.

In exclusive photographs obtained by the Nigerian Compass, one of those who took the oath, Hon. Wale Alausa, representing Ijebu-Ode State Constituency and a member of the Peoples Democratic Party (PDP), is seen holding a white article of oath, standing in front of a calabash filled with blood at the shrine.

A source said last night: “It is because of the oath that the crisis in the state has been protracted. They have vowed that nobody or nothing will stop them from achieving their goal, which is to impeach the governor and make the state ungovernable.

“In 2007, the father also begged that he should be made a lawmaker and the state PDP respected his view by giving the Ijebu-Ode State Constituency to his son.

“But since Wale Alausa and other members of the G 15 seized the Assembly in a coup last year, peace has eluded the state. That is why they are blocking the N50 billion bond and embarrassing members of the executive under the cover of oversight functions.” It would be recalled that the recalcitrant lawmakers began the festering crisis in the state by first impeaching the then Speaker, Mrs. Titi Shodunke-Oseni.

They followed the impeachment with her suspension and that of another member of the House who was loyal to her, despite the fact that the court ruled otherwise.

For several weeks, they also refused to sit, blaming lack of protection by security agents for their action.

Besides, they recently passed Resolution 167 barring financial institutions from dealing with the state government, especially over its attempt to raise a N50 billion bond. By Soji Adefemi