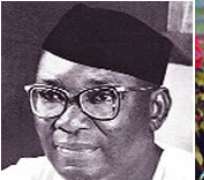 •Late Azikiwe & •Late Bello
Agitation for convocation of Sovereign National Conference (SNC), to right the perceived wrongs within the polity is gaining more ground rather than waning. RAZAQ BAMIDELE examines the genesis of the agitation that has become the country's equivalent of the mathematical recurring decimal that has refused to go away.

Genesis
A geographically demarcated piece of land called Nigeria came to being in 1914 when the Northern and Southern protectorate were merged together by the then Governor-General-Lord Luggard. And with coming together of over 400 ethnic groups forcefully against their own volition, tendencies are there for contradicting behaviours and conflicting ways of relating to one another.

And the Nigeria's forefathers, patriots and nationalists also acknowledged from the inception that, the issue of 'differences' has to be addressed to guarantee peaceful co-existence in the geographical expression called Nigeria.

In his back page column on Daily Sun of last Friday, the Deputy Managing Director/Deputy Editor-in-Chief (DMD/DE in C), Mr. Femi Adesina reminded his teeming readers what the nationalists of the blessed memory said about their fatherland.

The column, captioned: Constitution review and unfinished matters, was where Adesina recalled a conversation between two of our founding fathers, Dr. Nnamdi Azikiwe and Ahmadu Bello, as contained in a book, Ahmadu Bello: Sardauna of Sokoto written by N. Paden.

Bello was further quoted as admitting that the amalgamation of northern and southern protectorate as 'mistake of 1914.'

Confirming the fact that Nigeria is a country, which needs some manipulations to forge its true unity, the column quoted Gowon's maiden speech as Head of State in 1966 as saying that, 'the basis of (Nigerian) unity is not there.'

More confessions that the country Nigeria would have crises in the nearest future if something concrete is not done to attain nationhood came from Awolowo who said in 1947 that, 'Nigeria is not a nation. It is mere geographical expression.'

To underscore the need for system that will genuinely take the country to the path of nationhood, Sir Balewa was said to have had this submission to make in 1948: 'Since 1914, the British Government has been trying to make Nigeria into one country, but Nigerian people themselves are historically different in their backgrounds, in their religious beliefs and customs, and do not show any sign of willingness to unite…Nigeria unity is only the British intention for the country.'

Agitation
Having laid a foundation for this discourse through the well researched quotations contained in the said Adesina column, one can easily deduce from them that the country requires a formular that would wedge all the different ethnic nationalities together to form a true nation without them losing their distinct identities.

The agitation might be said to have started through the attempt at creating a Biafran State from Nigeria which led to a gruesome 30 month civil war between 1967 and 1970. But since the efforts at keeping Nigeria one is a task that must be done, the agitation still continues. This is a pointer that something must be urgently done to douse tension in the country.

Former National Secretary of the famous National Democratic Coalition (NADECO), that fought the Military to a stand still, Mr. Ayo Opadokun told Daily Sun in an interview that 'for Nigeria to move forward, we must sit down and decide how we want to relate to ourselves.'

Opadokun, a lawyer and activist, who is the current Convener of Coalition of Democrats for Electoral Reforms (CODER), is of the strong conviction that 'without a round table conference to iron out issues, the country will for ever remain in crisis.'

According to him, two questions that are germane are, 'do we want to live together as a country?' If the answer is yes, Opadokun added that the second one will be 'in what term?' He swore that until these two questions are asked and answered appropriately, Nigeria will continue to beat around the bush.

NADECO came about when the acclaimed freest, fairest and most credible election in the country on June 12, 1993 won by a southerner, Moshood Kashimawo Olawale Abiola was annulled by former President Ibrahim Babangida, a northerner.

That was when agitation for restructuring of the polity reached a feverish crescendo. It led to formation of several groups that went to the trenches to fight the perceived injustice and at the same time called for a Sovereign National Conference to correct the perceived imbalances in the polity that were always in favour of a particular section of the country.

Notable among the groups are the Campaign for Democracy (CD) of Beko Ransome-Kuti, United Action for Democracy (UAD) of Olisa Agakoba (SAN), Joint Action Committee of Nigeria (JACON), of Gani Fawehinmi (SAN), National Democratic Coalition (NADECO), of Chief Anthony Enahoro and Senator Abraham Adesanya among others.

Chief Frank Ovie Kokori, a NADECO chieftain and former General Secretary of PENGASAN, in his several interview has told whoever cares to listen that it sitting around a table to discuss the national question was long over due advising that the earlier the better.

Acceptance
After the civil war, it appeared as the country has been successfully brought together and united. But successive ethnic crises that led to formation of militants proved the impression wrong. Even after the judicial murder of Ken Saro-Wiwa and the Ogoni 8, the agitation for self determination become more ferocious. Niger Delta Militants surfaced, Oodua Peoples Congress (OPC), came onboard, MASSOB, Egbesu, and others also put up appearance and lately, the dreaded Boko Haram. All with demands that bother on self determination along their peculiar identities, thus making the call for the Sovereign National Conference an imperative national assignment.

The agitation for the SNC, which was made to look like a Southern agenda has now assumed a national dimension as leaders of ethnic nationalities have seen the need for the exercise.

Mallam Shettima Usman Yerima, the President of the Arewa Youth Consultative Forum (AYCF), is so passionate about the confab that he assured his kinsmen in the North that it is the only way out for the country.

In a recent interview with Daily Sun in Lagos he has this to say: 'Violent crisis can not stop until there is clean environment that allow its stoppage. The issue of disunity must be addressed or else we would wake up one day to discover to our chagrin that Nigeria is no more there.

That is why I am a strong advocate of Sovereign National Conference (SNC), because there is the need to sit down together to iron out some of these issues that had been causing frictions among us. 'Let us discuss to establish mutual understanding and eliminate all tendencies of mutual suspicion. Right now, northerners see southerners as enemies and vis versa. Likewise Christians and Muslims. With SNC, we can make it clear that we can make it together without breaking away.'

Speaking in the same vein, a lawyer and the President-General of the United Middle Belt Youth Congress (UMBYC), Abuka Onalo Omababa also buttressed Yerima's position on the SNC. His words:

National Coordinator of the OPC, Otunba Gani Adams (OGA), who allayed the fears that the SNC can break the country warned that 'refusal to hold it has greater potential to disintegrate the country.' According to him, the crises facing Nigeria today will persist until the SNC through which the correct structure would be put in place is organised.

The concerned activist stated emphatically that 'Boko haram and others like them will soon come onboard,' advising that 'the earlier the conference is organised to fashion out the way things should be, the better for Nigeria.'

The conference according to Adams would have genuine representatives of the ethic nationalities in attendance, saying, 'anything contrary will amount to wasting our precious time and postponing an evil day.'

To cap it all, the Coalition of Ethnic Nationality in Nigeria (CENN), comprising all the notable ethnic groups in the country met in Lagos recently to take a critical look at the state of the nation with a view to proffering solutions to them.

At the end of their one-day retreat under the leadership of the Founder and President of the OPC, Dr. Fredrick Fasehun the whole house, without an exception or abstinence unanimously voted for the SNC as the only panacea to the national question.

On a final note, the Coalition asserted that Nigeria would remain in crisis unless

The Federal Government showed commitment to the convening of the Sovereign National Conference (SNC) as the ultimate panacea for Nigeria's multifarious problems.

With this wide acceptance, will the government muster enough courage to do it? To this Fasehun urged President Goodluck Jonathan to write his name in gold by working towards it, saying 'it will go down in history, that he is the President that right the wrongs in the country and his name will thus remain a household one.'

'The agitation might be said to have started through the attempt at creating a Biafran State from Nigeria which led to a gruesome 30 month civil war between 1967 and 1970. But since the efforts at keeping Nigeria one is a task that must be done, the agitation still continues'