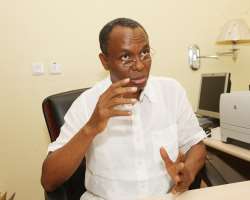 ABUJA, July 19, (THEWILL) - The Senate today set up a seven-man ad-hoc committee to carry out an in dept investigation of the privatization and commercialization activities of the Bureau for Public Enterprises (BPE) from its inception in 1999 to date.

The import of the resolution is that the searchlight would be on former President Olusegun Obasanjo tenure and former Vice President, Atiku Abubakar who was the Chairman of the National Council on Privatization (NCP).

The committee which is chaired by Senator Ahmad Lawan (ANPP, Yobe) has as its terms of reference; to establish the agreements and or conditions upon which the privatization was consummated; determine how much was realized from the sale of the companies and where the proceeds were paid into and determine how many jobs were lost and gained after the privatization of companies. The probe is to be done within four weeks.

The President of the Senate, David mark however warned that this is not time to play to the gallery with the probe or witch-hunt anybody and advised senators in particular, members of the ad-hoc committee to approach the probe with open minds.

“I believe that the privatization policy is a worthwhile policy, it is a desirable policy but there would have been problems, there could have been problems here and there and I think those problems are where the committee has to look at again so that they can make recommendations that will be beneficial to all of us and the nation in the future.

“Let me quickly add that we should approach this exercise with an open mind; there should not be any witch-hunting, we have no pre position, we are not in any way going with the view or saying that this is the answer that we should arrive at, because the bureau would have done a few good things and a few bad things nobody knows.

“To the best of our ability, we should approach it with an open mind, no playing to the gallery in this exercise, let us do a thorough work so that when the findings are brought here people will appreciate the fact that those who have been put in the committee have done a thorough work, a work that can stand the test of time, the public should be involved and those who are stakeholders should be involved.

“Definitely the searchlight will be on the members of the committee and you must be above board absolutely above board in what you are going to come up with. I believe that there could have been problems with the implementations and those problems must be brought out not just to apportion blames but you must also make recommendations so that as we continued the privatization exercise, those mistakes that were made in the past will not be repeated in the future.

The resolution was sequel to a motion on ‘the collapse of some privatized federal government companies in Nigeria’ sponsored by Senator Lawan and 20 others.

Moving the motion, Lawan said he was concerned that, the chairman of the NCP, the Vice President of Nigeria told the nation that ‘’80 percent of government companies that have been privatized have failed to operate properly due to lapses in the privatization process.”

Seconding the motion, Senator Enyinnaya Harcourt Abaribe (PDP, Abia) said; “when we look at what has happened to the privatization exercise, one cannot but feel that Nigeria is worst for it. All the companies that have been privatized did not just lose money, but have increased unemployment. Something must be wrong with the initial plan of the privatization, which boils down to the elephant called corruption. Functional companies that were privatized are no longer functioning. Somebody must be called to account for what happened. El-Rufai has been going about writing and even saying he wants to privatize NITEL.”

Contributing to the debate, Smart Adeyemi (PDP, Kogi) said- “Privatization is the worse government policy since independence. This is a policy that has further widened the gap between the rich and the poor. It is a policy without a human face; it handed over our economy to the hands of some few wicked Nigerians. It further enslaves us, increased unemployment. This is the greatest fraud that has ever been committed against this country.

To the Deputy Majority Leader, Senator Abdul Ningi (PDP, Bauchi) - “This is the biggest fraud this country has witnessed. There is nothing wrong with privatization, but unfortunately it has not been properly done”.

Senator Nurudeen Abatemi (PDP, Kogi) also lamented that;- “Over 360 companies in the country have been privatized among them are fertilizer company in Kaduna, Peugeot Company Kaduna, Ajaokuta steel, all of them have the same problem either all the workers have been sacked or the few that are left have no salary. About 4000 workers working in Ajaokuta steel are complaining of no salary that they have not been paid and it is the same complain all over the 360 companies that have been privatized. Corruption has taken another level in the country and the Senate should beam its search light on this great fraud called BPE”.

In the same vein, the Majority Leader, Senator Victor Ndoma-Egba (PDP, Cross River) declared that; “Privatization ordinarily would have been a great advantage to this country. Corruption is the consequences of inefficiency in government. Nigerians need to know how much have been realized from the sale of these companies and where the money was spent, where did the money go, because the money was supposed to go to the consolidated account of the federal government. Nigerians deserve to know and indeed they must know. Privatization is not a bad policy but the process it was carried out.

However, Senator Adegbenga Kaka (ACN, Ogun) said;-“It is necessary to investigate the beneficiaries to know whether they have met with the process which the objective was set to meet ab-initio”.