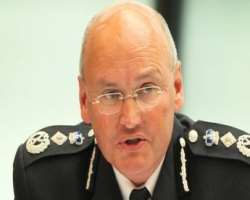 Britain's most senior police officer has faced criticism for hiring former News of the World executive Neil Wallis - who was questioned by police investigating hacking - as an adviser.

He said there were lessons to be learned from the affair, but he was leaving with his integrity intact.

It came after discussions with his employer, London Mayor Boris Johnson.

In standing down, Sir Paul said he had no knowledge of the extent of the phone hacking.

Home Secretary Theresa May said she was "sorry" he had resigned and thanked him for all the work he had done during his time in office.

She said: "Sir Paul has led the force through difficult times and although current circumstances show that there are still serious issues to be addressed, I believe that the force is operationally stronger today now than it was when he took over."

Earlier, she said she would address MPs on Monday about her "concerns" over the closeness of the relationship between News International and police.

'Great sadness'
Sir Paul said in a statement: "I have taken this decision as a consequence of the ongoing speculation and accusations relating to the Met's links with News International at a senior level and in particular in relation to Mr Neil Wallis."

He added: "Let me state clearly, I and the people who know me, know that my integrity is completely intact.

"I may wish we had done some things differently, but I will not lose sleep over my personal integrity."

It is expected that Sir Paul's deputy Tim Godwin will take charge of the Met with almost immediate effect, before a more formal appointment process takes place.

In other developments:
• Ex-News International chief executive Rebekah Brooks was arrested on Sunday by police investigating phone hacking and bribery at the News of the World. After being held for 12 hours, Mrs Brooks was released at midnight

• Several Sunday newspapers feature promotions in an attempt to woo former readers of the News of the World, which was the UK's best-selling newspaper

• John Whittingdale, chairman of the Commons media select committee, says former News International chief executive Rebekah Brooks will probably be spoken to separately from Rupert and James Murdoch on Tuesday when they appear before MPs, adding that the committee should not act as a "lynch mob."

Sir Paul has also faced questions over his stay with his wife at a luxury health spa which employed Mr Wallis.

The journalist was working as a public relations consultant for Champneys spa when Sir Paul recuperated from surgery there earlier this year.

The Met acknowledged Sir Paul had stayed there for free while he recovered from a fractured leg caused by an operation to remove a pre-cancerous tumour and said Sir Paul had been unaware that Mr Wallis had worked as Champneys' PR consultant.

It added that the free stay had been recorded in the senior officer's gifts and hospitality register, due to be published shortly, when he returned to his post.

Sir Paul said he had informed Buckingham Palace, Ms May and his employer, London Mayor Boris Johnson, about his decision to resign.

He and Mr Johnson had several discussions over the weekend, BBC Political Editor Nick Robinson said.

The mayor also warned the prime minister he was considering serious action.

On Sunday, Mr Johnson said he accepted Sir Paul's resignation with "great sadness and reluctance" and he had no reason to doubt his "complete integrity".

He said: "We have got to get on with bringing crime down, and although Paul has done a fantastic job over the last three years, he felt that with the distractions of all these committee hearings, this inquiry, the judge-led inquiry, one thing and another, he was endlessly going to be focused on phone hacking when he wanted to get on with other things.

"So he felt that it would be better to let a fresh pair of hands, fresh pair of eyes, get on with that job, fighting crime, getting London ready for the Olympics rather than being distracted. In the end I agreed to that."

The chairman of the Home Affairs Select Committee - Keith Vaz - said he was "genuinely shocked" by the announcement.

"He was very keen that people realised that his integrity was intact, and I think what he basically said was, he was concerned about the leadership of the Met at this time," he said.

"It is a very brave decision, and I'm shocked by it, actually, because I don't think there's anything in the statement in particular that points to any wrongdoing or inappropriateness on the part of the commissioner."

"He recognises that things have happened on his watch, which mean there will always be questions about his leadership," he said.

Sir Paul hired former News of the World deputy editor Mr Wallis as a PR consultant for the Met.

His media consultancy company - Chamy Media - was used by the force from October 2009 until September last year.

He was paid £24,000 to work as a two-day-a-month PR, until his contract was cancelled four months before the launch of the Operation Weeting investigation into phone hacking began in January this year.

As part of the contract, Mr Wallis advised the Commissioner's Office, and the Directorate of Public Affairs and Specialist Operations, working closely with Assistant Commissioner John Yates, who led an earlier Met inquiry into News of the World phone hacking.