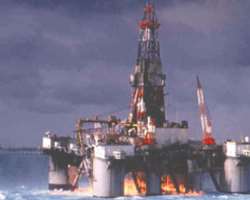 An estimated 11 billion barrels in oil reserves have been found off Namibia's coast, with the first production planned within four years, mines and energy minister Isak Katali announced Wednesday.

The finding could put Namibia on par with neighboring Angola, whose reserves are estimated at around 13 billion barrels and whose production rivals Africa's top producer, Nigeria.

'The largest of these, the Nimrod Prospect in 350 meters (1,150 feet) depth, and most likely reserves in the event of success are estimated to be greater than four billion barrels,' he told parliament.

*Offshore oil rig on fire.
'Enigma expects to find oil rather than gas,' Katali said, adding that first production could begin as early as 2015.

Enigma holds a 50% equity in the offshore Southern Block together with Brazil's Petrobras.

According to Katali, another Brazilian company, HRT Oil & Gas Ltd, has raised $1.3 billion on the Brazilian stock market, with $300 million earmarked for oil and gas exploration in Namibia.

He said that HRT has certified about 5.2 billion barrels of potential reserves.

'This finding could turn offshore Namibia into a great producer of oil and gas in a short time,' Katali said.

In his statement to Parliament, Katali added that HRT would drill three to four wells in that area as early as next year.

'We expect that six to eight wells to be drilled in Namibia's waters in the next 18 months, the highest number in Namibia's exploration history,' he said.

Namibia has long been seen as a potential new source of oil, hampered by a lack of exploration to determine the extent of its reserves. Its offshore geology is similar to Brazil, which is seeing a boom in oil.