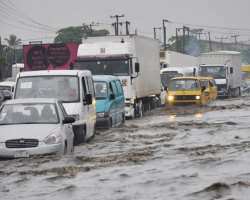 ABUJA, July 17, (THEWILL) - The Action Congress of Nigeria (ACN) has expressed its disappointment at the failure of President Goodluck Jonathan to visit Lagos State, in a show of presidential concern and support, in the aftermath of last Sunday's devastating massive flooding in parts of the state.

In a statement issued in London Sunday by its National Publicity Secretary, Alhaji Lai Mohammed, the party said President Jonathan should realise he is the President of all Nigerians, not only of the PDP and its supporters, hence he should see the entire country as his constituency.

Besides, it said, Lagos is the economic heartbeat of Nigeria and home to all Nigerians, irrespective of their tribes, hence whatever affects Lagos touches every Nigerian one way or the other.

ACN wondered how the President can be so quiet despite the devastating effect of an unusually heavy rainfall on in Lagos on July 10th, in which some 264mm of rainfall (a volume equivalent to what is usually recorded in one month of rainfall) was recorded in a single day, leading to massive flooding that claimed the lives of many residents and caused a huge damage to property.

''A President that is not too busy to receive all manners of people in Aso Rock has not deemed it fit to embark on a quick trip to a state as strategic for all Nigerians and the nation's economy as Lagos, after such a state was hit hard by a natural disaster. Even if the President and his advisers did not understand the symbolism of such visit, they could have taken a cue from what obtains in other climes.

''In April 2010, Chinese President Hu Jintao and Premier Wen Jiabao both postponed planned overseas trips because of a strong earthquake in North western China. In April 2010, US President Barrack Obama visited flood-hit Massachusetts, and personally thanked emergency operation officials monitoring flooding in the state. He carried out a similar tour of tornado-hit Missouri this year. And in Nov. 2009, then British Prime Minister Gordon Brown visited flood-hit Cumbria in Northwest England to see the damages caused and show government support for the victims.

''These are instances to be emulated by any leader who believes the people are the source of his powers. Nigeria's President Goodluck Jonathan, who by the way received massive votes in Lagos during the last elections, should not be an exception,'' the party said. ''Today marks the eighth day since the Lagos flooding, and President Jonathan has yet to visit the state or even comment on the incident. This is not right.''

ACN expressed shock that instead of the President's party pointing him to the right path by encouraging him to visit Lagos after the flooding to show federal support and rally emergency service officials, especially the National Emergency Management Agency, the party (PDP) resorted to cheap politics by asking Gov. Fashola to resign, as if he - or anyone at all - has control over natural disasters.

The party praised Governor Babatunde Fashola and his team for their prompt response to the flood disaster, saying the state government's show of concern for the victims and its quick intervention to alleviate their suffering went a long way in soothing the pains of affected Lagosians and reassuring them that their government cares.