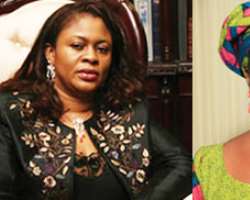 L-R: Oduah-Ogiemwonyi, Akunyili
The growing influence of women in Anambra State politics is attracting the attention of stakeholders in the state, writes EMMANUEL OBE

Mrs. Stella Oduah-Ogiemwonyi, the Minister of Aviation, has resumed in her new office. But the dust that was raised in the wake of her nomination as a minister two weeks ago by President Goodluck Jonathan is yet to settle.

Shortly after she became the eventual ministerial nominee from Anambra State, some protest went through the political landscape of the state. The bone of contention was the the state of origin of Oduah-Ogienmwonyi, who though has her roots in Anambra, is legally married to the former Minister of State for Works, Chief Chris Ogienmwonyi, who is from Edo State.

Of recent, some high-profile political office reserved for the state have been taken up by women, who though Anambra indigenes had been married out to people from other states.

Before Oduah-Ogiemwonyi's appointment was that of Mrs. Josephine Anenih, the immediate past Minister of Women Affairs. Like Oduah-Ogiemwonyi, Anenih is married to an Edo State politician, Chief Tony Anenih.

The development has not gone down well with a good number of politicians in the state, who feel that they have been denied opportunities to occupy postions at the federal level with this arrangement.

For instance, a former member of the House of Representatives, Dr. Okey Umeano, kicked against the nomination of Oduah-Ogienwonyi, who he said though eminently qualified, ought to have been nominated from Edo State.

Umeano, a former All Progressives Grand Alliance National Assistant Financial Secretary, believes that once a woman is married, she automatically belongs to her husband's constituency. In other words, he believes that such a woman should draw her inheritance from there.

He further argues that when women are appointed or elected to represent their fathers' constituencies, a crack is being created in the marriage between them and their husbands' people.

The APGA chieftain criticised the appointment of Anambra daughters married outside the state to take the quota of the state.

He said, 'A woman, belongs to her husband's people, except when that woman has been legally separated from her husband. I do not subscribe to the PDP system of appointing a woman married to a man from another state to fill our quota.

'It happened under President Olusegun Obasanjo administration. If they want to give us our own quota, let them give us people that are from our state. Mrs. Oduah-Ogiemwonyi, who is married to an Edo man should be apportioned to represent that state, and not Anambra State.

'In marriage, one plus one is one. By tying the woman to her maiden home, you are putting asunder what God has joined.They should not make the women feel that they are not part of their husbands' home.'

However, the Anambra State Governor, Mr. Peter Obi, comes quickly in defence of Oduah-Ogiemwonyi's appointment. He said that as a daughter of the state, an achiever in the private sector, the woman was eminently qualified to represent the interests of the state.

Obi says, 'Having recorded tremendous success in the private sector, I believe that she will bring her wealth of experience to bear in public life which is what Nigeria needs and will surely make her marks. She is our daughter; she is competent and has proven herself worthy of public trust such that Anambra people are happy over her appointment.'

As Obi canvasses this, Mr. Okey Okoye, a notable politician from Ayamelum, who supports Umeano's position, argues that the governor's quick rise in the support of Ogiemwonyi is political.

He argues that the governor, being a member of the opposition party; would want to court the friendship of Ogiemwonyi, who by virtue of her position, has become the highest political office-holder from the state at the federal level.

Okoye said, 'Taking an antagonistic position will not augur well for the governor, whose warm relationship with Mr. President suddenly went cold after the April general elections. If you recall, you would note that Obi enjoyed an excellent relationship with Jonathan when Dora Akunyili was the Minister of Information and Communications. The governor wants a return to that situation. And that is why he wants to support Ogiemwonyi against all odds.'

As if to corroborate Okoye's line of argument, the Senior Special Assistant to the governor on Media and Publicity, Mr. Valentine Obienyem, said the governor would work closely with the minister by offering her necessary support.

The successive appointments of Anambra daughters to high office at the federal level, however, appears to be a symptom of the growing profile of the womenfolk in the state that prides itself as the Light of the Nation.

According to Mr. Chuks Okeke, a journalist in Awka, since the new political dispensation started in 1999, Anambra women have been showing their class. He, nonetheless, linked it to the embrace of education by women in a state that is alleged to have a high incidence of male dropout syndrome.

Indeed, before the return of democracy, the late Mrs. Janet Mokelu, who stood out as a Minister in the First Republic, had actually set the pace.

In 1999, Senator Joy Emodi, now the Special Adviser to the President on National Assembly Affairs, ran a high profile campaign for the governorship of the state. She had lost primarily to the bandwagon embrace of the PDP by the people of the state, who had hoped that by supporting PDP, they would prepare the way for Dr. Alex Ekwueme to clinch the Presidential nomination of the PDP. She went on in 2003 to win election to the Senate on the party's platform. Today, she stands out as one of the most influential politicians from the state.

Shortly before Emodi got into the Senate, Prof. Akunyili had begun making her mark as the Director-General of the National Agency for Food and Drug Administration and Control. She capped her performance with an appointment as Information and Communications minister in 2008.

Not lacking in courage, Akunyili it was that stood alone to ask members of the Federal Executive Council to do the right thing by raising a report on the health of the late President Umaru Yar'Adua and make the necessary declarations to save the country from embarrassment. Against all odds, she quit her ministerial job and the PDP to run for a senate seat in 2011 on another platform.

Akunyili's predecessor in the Federal Executive Council was Dr. Oby Ezekwesili, who popularised the Due Process principle when she was the Director-General of the Bureau for Public Procurement. She continued as the Minister of Solid Minerals with the introduction of the National Extractive Industries Transprency Initiative; and later as Minister of Education, where she attempted to liberalise public education and involve private investors in public education.

At other levels, women from the state have continued to do well at the national level. Former Miss Nigeria, Miss Lynda Chuba-Ikpeazu, a two-time member of the House of Representatives, fought alongside other members of the Integrity Group to change a corrupt leadership of the House in 2007.

Mrs. Callista Nwachukwu, from Imo State, had set the pace in 1998, when she contested and won election as the Chairman of the Ogbaru Local Government Area on the platform of the Alliance for Democracy.

In the civil service, Anambra women have held sway as Head of Service since 1999 when Mrs. Elsie Ikemefuna was appointed by the military. Mrs. Ngozi Melifuonwu, who retired a few months ago, succeeded her.

Whether they are married out or not, Anambra women are coming strong. And it might just be time that will stand between them and the effective political control of the state.