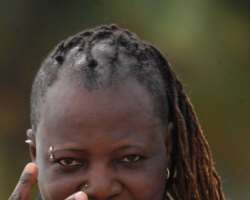 News filtering in reveals that Charly Boy and his former Personal Assistant of many years, Helen Atim Sosu, are currently at loggerheads.

According to source, the raging battle between the two which had been kept away from the public glare for a long time, assumed a nasty dimension recently when the musician issued a disclaimer on Sosu and three others early this week in some popular soft sell magazines.

Responding to the disclaimer, Sosu in a recent message on social network site, Facebook compared her ordeal with Charly boy to that of Biblical Haman and Mordecai.

She wrote ;” If Haman only knew the gallows he was erecting to hang Mordecai was actually for himself, he would have had a re-think.”

Continuing, she added;” Between Pharaoh and Moses, if Pharaoh had known his declaration against the first-borns of Isreal,was actually for his own first born and that of the Egyptians, he would have held his tongue!

But when God fights a battle, our enemies never know his battle plan.”